On the 31st October 2014 I attended the unveiling of the statue of Pte Robert Mactier VC at Tatura. Pte Macier won his VC on the 1st September 1918, just a couple of months before the end of WWI, but I suppose no-one was to know that at the time. 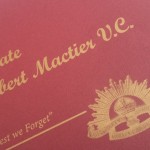 That day, Mactier was a battalion runner serving with the 23rd Battalion, Australian Imperial Force. He was sent forward by an officer to determine the cause of a delay in the battalion moving into its jumping off position. The cause was a well-placed enemy machine gun. On his own initiative, Mactier jumped out of the trench and charged the enemy machine gun, killing its crew of six. He then charged two other machine guns, killing more crews and causing at least 40 enemy to surrender. He was killed by fire from a fourth machine gun, but not before enabling his battalion to form up on time.

Such sacrificial actions are usually (and appropriately) referenced to the statement of Jesus that “Greater love has no man, than to lay down his life for his friends.” (John 15:13) but they do nothing to explain why someone would take upon themselves such responsibility. 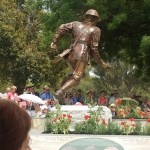 These actions are counter to much of the reasoning of group psychology. We are familiar with the idea of the bystander effect; wherein people stand by when someone is in trouble and fail to offer help. The theory goes that when we are in a group and someone is in need (heart attack, being attacked, etc.) we are likely to do nothing, thinking that there will be someone else better able, better qualified to step forward and offer help. By this logic Pte Mactier should have done nothing. He was the lowest rank, he was not there to fight and there were clearly designated leaders whose role it was to determine tactics and give orders.

I find it fascinating to reflect on how it is that one person (a private no less) takes it upon himself to initiate an audacious attack. What sense of “it’s up to me” possesses such people? How did the ranking leaders feel? How did the people alongside of him feel as he left the trench and ran headlong into the machine gun nests? Did no-one feel able or obliged to join him? Did anyone give an order? Did it become a regular tactic in future battles? Extraordinary!’

Malcolm Gladwell in his book ‘Blink – The Art of Thinking without Thinking’ says, “We live in a world that assumes that the quality of a decision is directly related to the time and effort that went into making it…We believe that we are always better off gathering as much information as possible and spending as much time as possible in deliberation. We really only trust conscious decision making. But there are moments, particularly in times of stress, when haste does not make waste, when our snap judgments and first impressions can offer a much better means of making sense of the world.”  The actions of Pte Robert Mactier on the 1st September 1918 seem to be better thus explained.

I am left wondering about the tensions between careful planning and spontaneous action. As a church I believe we need to carefully and prayerfully plan, but as individuals I know that there are moments and occasions that come to us unique to time and place, which if we fail to respond to in the moment, they are gone. The Jesus of the gospels is someone who grasps each moment, transforming it, redeeming it, making it God’s moment and the kingdom breaks in. But he is also someone with a greater plan and sense of mission. He is on the way to Jerusalem, to confront the corrupt powers (secular, religious and spiritual) and ultimately to die. To lay down one’s life in the moment is brave; to freely and consciously walk a path that leads to the cross is something else again.