Travelling light is an important concept for anyone who travels by air. Baggage limits require the traveller to seriously consider, “Do I need this?”  Experienced travellers know that there are always clothes and items we pack and take that we never needed or used. 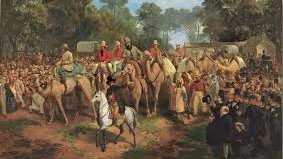 The Burke and Wills expedition was one of the best funded expeditions ever to be mounted in Australia. Not being short of funds and going into the unknown, the expedition took a serious quantity of supplies and equipment, including enough food to last two years. But they also took a lot of stuff that just defies explanation: a cedar-topped oak dining table with chairs, a piano, a Chinese gong, tonnes of firewood, and desks for Burke to sit on to write journals that he never wrote.  The equipment altogether weighed over 20 tonnes. Needless to say, all this stuff slowed them down, and most of it was disposed of along the way.

Journeying into the unknown can make the bravest of us want to take precautions. What should I take with me? What will I be able to get along the way? Will people be friendly or hostile to me?

There is a story in the gospels of Jesus sending his disciples out on a mission. He tells them to travel light (really light!), to trust in the hospitality of strangers and when things don’t measure up to their expectations, not to dwell on it but to move on. Here are his words, “Take nothing for the journey except a staff—no bread, no bag, no money in your belts. Wear sandals but not an extra shirt. Whenever you enter a house, stay there until you leave that town. And if any place will not welcome you or listen to you, leave that place and shake the dust off your feet” (Mark 6: 8-11) 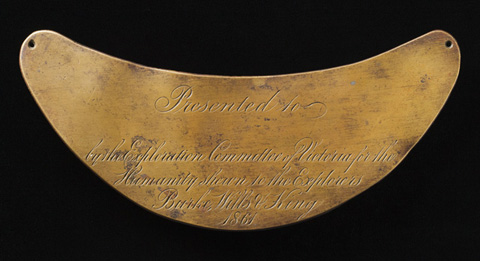 Breastplate presented to the Yandruwandha people “for the Humanity shewn to the Explorers Burke, Wills King 1864

Burke and Wills felt they had to be independent: two years food and firewood! They didn’t trust the local Aborigines and they didn’t know how to use the food sources along the way. In the end, Burke and Wills met very tragic deaths. The only survivor of those who crossed the continent was King, he was taken in by the Yandruwandha people and was nursed, fed and housed by them until his return to Melbourne.

We all face uncertain journeys at times in our lives. Not just when travelling, but in times of sickness, the death of a loved one, going into residential care as we age, and in coming to terms with our own mortality. As the bible says, “we brought nothing into the world, and we can take nothing out of it”. (1 Timothy 6:7), but if we travel with faith in God and a belief in the basic goodness of others we will travel well.