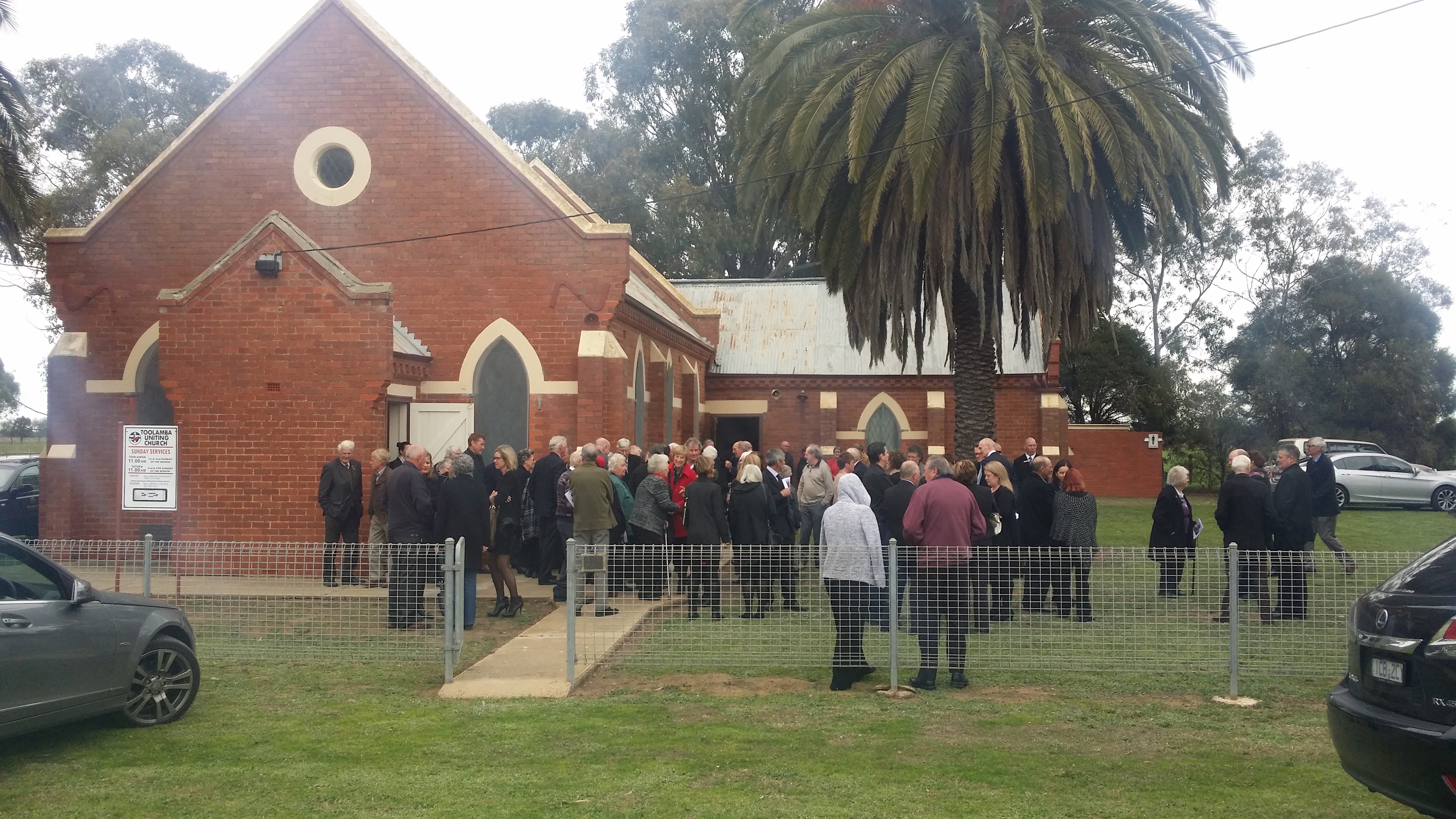 The little church at Toolamba was packed last Friday (21/8/15) for the Memorial Service held for James Crawford. James died the previous Sunday morning (16/8/15) after a decline in his health over the past few months.  James was a much loved and active member of our community. A loving husband to Pat, father of Andrew, grandfather and great grandfather. 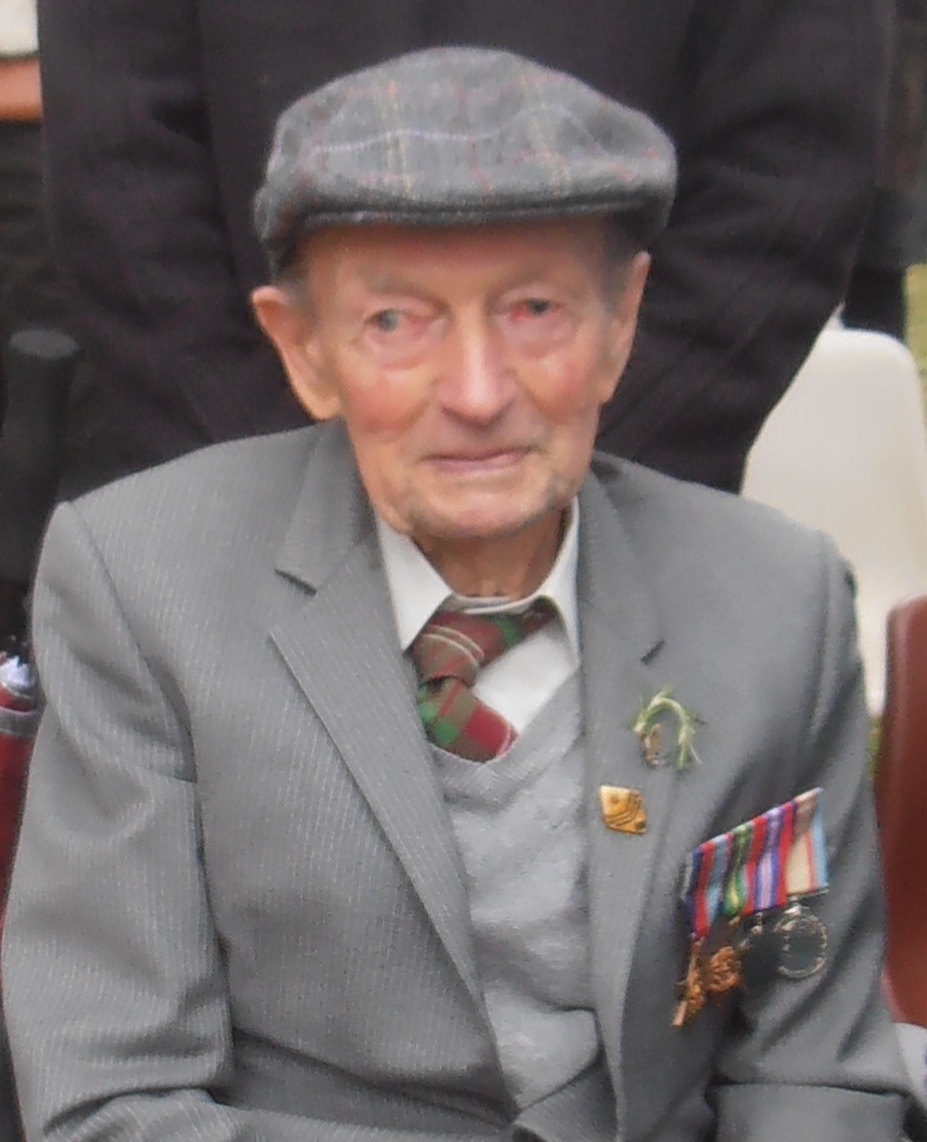 James was an active member of the Uniting Church for many years, both at Toolamba and at Tatura. He was an elder and an organist for more than 50 years and was treasurer for nearly 40 years. Current elder Beryl Cross lit the Christ candle and extended sympathies to the family on behalf of the church.

The Crawford family have a long association with the Toolamba church. James was baptised, confirmed and married at the church. In the modest obituary that James wrote he made it clear that it was also his wish to be buried from the church as well.

James also had chosen hymns and readings for use at his funeral. The readings and hymns are instructive of the values and faith that guided his life. James’ daughter in law Alison and grand-daughter Katherine read the parables of the Good Samaritan and the Prodigal Son. These stories proclaim a practical faith, service to others, grace and forgiveness for all. Fittingly for an organist James had chosen three hymns that not only contained strong words of faith, grace and discipleship, but were easy to sing. Eulogies from his brother Andrew, his son Andrew, Bev Williams (Toolamba Uniting Church) and the RSL painted a picture of a person of faith, self-discipline and perseverance.

In James’ own words:      Written by James 15/05/1997
James was born at “Woodlands” the Crawford home on 6th June, 1922, his primary education was at the former Toolamba South(later west) school, he attended there for eight (8) years under the one teacher- Mr Lowrie, for his secondary education he attended Ballarat College as a boarder for two(2) years, and then worked on the family farm until the outbreak of World War 2 when he joined the Australian Army serving in Northern Australia and Merauke, Dutch New Guinea for five years.
On discharge back to the farm and purchased the farm his son – Andy – now owns, which is adjacent to “Woodlands”.  Pat and James shifted into Tatura in 1980, when their son Andy got married
Having spent his whole life in the Toolamba – Tatura District James was involved in many organisations, his early life commenced in the Toolamba Church, he was christened, confirmed and married there,  attended P.F.A – A young peoples church organisation- played the organ for 54 years, treasurer of the church 31 years, and served as an elder for many years.
Other organisations included- Masonic Lodge 50 years, a past master and organist, Tatura Agricultural Society Tatura show steward 50 years,  Tatura RSL 50 years,  secretary-treasurer of Toolamba South school committee 20 years,  treasurer Tatura Historical Society 14 years, Treasurer Tatura Senior Citizens 10 years Member of Tatura Garden Club and treasurer for 4 years
Written by James 15/05/1997

Dad had many other interests and highlights throughout his life.  He was a very keen swimmer often telling the story of how he learnt to swim being thrown off the channel bridge with a rope tied around his waist.  He was still swimming in the Tatura pool at 91 years of age.

He enjoyed travelling catching up with distant cousins in America and Ireland, travelled to Japan with his sister Margaret as well as numerous outback trips throughout Australia.

When his grandchildren, Katherine, Jono, Andrew and Tom were young, each Friday, Papa would collect them from the farm, taking them to Tatura for tea with Gran and Tom remembers this always included a walk to the park.

A weekly tradition was the trip to Shepparton on Friday with Mum for lunch. In recent years the trip included a visit to see his great grandchildren Jack and Olivia. They visited Dad last week and it bought a smile to his face as Olivia waved goodbye.

He always enjoyed travelling to Melbourne especially in later years to the ANZAC March. This year it was great to have all the family there watching Dad at the Tatura ANZAC march.

Dad was a great collector of clocks, which included a Grandfather and cuckoo clock, he was always winding clocks and he enjoyed hearing them chime.

Due to failing eye sight, much to his annoyance he lost his driving licence but he was a very keen walker and he also down graded to a scooter.  In later years he was always forgetting where he parked his scooter but it always seemed to find its way home.

Dad was able to live at home until late last year when due to failing health moved into Moyola Lodge, where he renewed old friendships and received wonderful care.

Dad and mum were married for 63 years and I think if you were to ask him, he would say he has lived a happy healthy fulfilling life.

Long term members of the church would like to acknowledge the life time contribution made by James Crawford to the conduct of worship and the general running of the church organisations and also the physical upkeep of the buildings and surrounds. James was justly proud of the long years of service he was able to give to many aspects of community life, we of the church community are very thankful for it.

James was born towards the end of the life of the old Pioneer Church which preceded this building. We believe that he would have been the last surviving person to have attended the old church, and he was very likely baptised in it, thus a link with the past has been severed. James took his church life very seriously and felt it a privilege to take responsible offices. He used to say “I’m just doing my job”, and it was always thoroughly done. As a teenager he along with all the other young church members formed a P.F.A. branch at Toolamba under Rev A.A. Bell’s leadership. James became treasurer. About this time, having completed school at Ballarat where he had learnt music James started playing the organ occasionally at Toolamba. This was interrupted a few years later by war service, but later was to resume each alternate Sunday until failing eyesight bought it to a conclusion in old age. Interestingly, James had been preceded by his cousin Mary Crawford and his Aunt Agnes Crawford who between them had played for most of the life of the church here.

The roll of Elder was dear to James’s heart especially when he was younger. He held this appointment until his death. Once again, he was succeeding another two Crawfords – his father, and his Uncle George both long term and much loved Elders at Toolamba.

The succession theme continues. James was a long term treasurer of the Board of Management and Property Committee but Uncle Sam Crawford, years earlier, was the treasurer for quite a bit longer. Church finances were in good hands with James. There was always an Annual Appeal, James had a list of everyone he even remotely connected with the church, and annually visited each of them.

As earlier mentioned James served in the Second World War following his father Lt.Col. Andy who served in the 1st war. From 1951 when the second honour board was dedicated, it was James or his Father who saw to it that a wreath laying ceremony was held on commemoration days. This event was always taken very seriously.

In practical ways James and his son Andy took responsibility for many years for the upkeep of a tidy appearance around the church. This involved regularly cleaning the gutters and slashing the grass. This was prior to our roster system kicking in and the occupational health and safety rules creating problems with ladders.

Over the period of this churches existence you could always count on the Crawfords for the occasional exceptional event. The outstanding event was the 1971 celebration of the Centenary of the “Woodlands”selection. Another was the  “Fenton Hall “Centenary. Others were various weddings and funerals. There has always been this special link between the family, their faith, and this house of God. Clearly, through his long, rich and constant involvement in this community of faith, James Crawford has left his mark. We who carry on will always be grateful and give thanks to God for his Christian life at Toolamba.