The Art of Reinvention

“Look up here, I’m in heaven, I’ve got scars that can’t be seen” (Lazarus – video below)

The recent death of singer/songwriter David Bowie has sparked considerable comment and grief among his fans and those for whom he created much of the soundtrack of their lives. He was an extremely gifted artist. Besides the many comments about the genius of his songs, one of the most frequent comments was Bowie’s capacity to reinvent himself many times throughout his long career.

Reinvention refers to the ability to change styles, to change appearance, to appeal to a new group of people, to refresh, revive and to grow professionally and as a person. These are admirable traits and ones that fans are more likely to have to emulate than Bowie’s musical abilities. 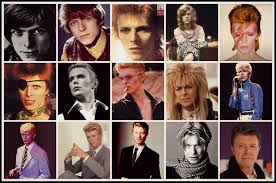 Life changes so fast, so unexpectedly that the ability to change and reinvent oneself is a vital skill in today’s world. Jobs that in the past were “jobs for life” disappear or become part-time, casual and insecure. Relationships break up. The breakdown of a marriage or long term relationship is traumatic, not just for the couple involved, but also to those who know and love them. Divorce can dislocate you from your whole friendship network and require reinvention.

Sometimes the need for reinvention happens because we feel we are stuck in a rut. We are doing a job that we fell into or have long since lost the passion for. We made some big mistakes in our past and people have us stuck in a box and we want to break free.

There is a story of a man coming to Jesus at night. He is wrestling with the idea that he too should become a follower of this strange man but he is afraid. Jesus says to Nicodemus, “You must be born again” to which Nicodemus asks “How can a man be born again when he is old?” The term ‘born again” has been hi-jacked through overuse by some conservative Christians but it is about a fresh start, a chance to start again, reinvention.

One of the weights that press on our shoulders in times of stress is the feeling that we are inadequate or unsuitable to do what is necessary to reinvent ourselves. We tell ourselves that we are too old, unskilled, too scared and would be even worse off if we tried and failed. We start to feel we have too much to lose.

It is possible that David Bowie’s reinventions of himself connected with more people than his music did. His new incarnations tell us that anything is possible. We can break free. We can start again. Failure is never permanent.

Jesus spent his life working with people who thought that they were too old, too young, too unqualified or too evil.  They weren’t!

On his last album Blackstar released just weeks before his death Bowie performs this very poignant song called “Lazarus”. It is a telling example of his changes in persona and the depth to his writing and perhaps his secret knowledge of what was to come.