﻿The joy of forgetting.

Rarely a day goes by without some contemporary of mine moaning to me: ‘Oh, my memory’s going!’  Perhaps they have misplaced their keys or forgotten a name or an appointment. Often they will stop and, with a sheepish smile, say: ‘Ah – a Senior’s moment!’ 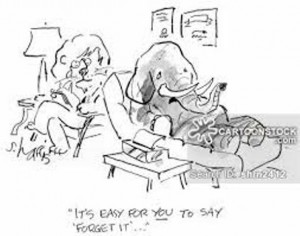 While those of us over a certain age are worried about remembering things which shouldn’t be forgotten, those below a certain age seem obsessed with creating memories. Every phone has a camera and there is hardly anything that happens that someone doesn’t think is memorable or worth sharing. And so Facebook is filled with pictures of food, places and faces which have been captured to share with a waiting world.

Personally, I’m not that big on photos. I take a lot but almost never have them printed and they soon get lost in the bowels of my phone or computer. Many of my memories are locked in physical things. Trinkets, furniture and curios that have been given to me by people I love or that I have bought while travelling. Whenever I look at or use these things, my memory of the place and people is reinforced. These things evoke feelings as well – warm feelings of love and life.

But sometimes my wife will say to me, “Do you remember …?” and I’ll look at her blankly and say, “No.” If she presses, “Yes you do, it was …” and I search the recesses of my brain mostly I come back with “No.” And to be frank I can’t see the problem. At the age of 63 I’m aware that my memory, as I age, is changing but not necessarily deteriorating. I find myself using the computer analogy “The hard drive was full and I must have deleted that file.”

Is it really such a big deal? My wife is recovering from a recent Hysterectomy. She has been on some quite strong pain relieving medications and is under strict orders about not lifting, bending or stretching. The last time she would have been in so much pain was after the birth of our youngest child. It was a Caesarean birth, hence a similar surgical intervention to her recent surgery. Both Cynthia and I cannot remember what we did or how we coped back then. Women seem to have a great ability to forget the pain of childbirth and a good thing too or the human race would be doomed.

There are many hurts and disappointments in our lives that we would do well to forget. The old saying was to “forgive and forget”. Many of us say we will forgive but not forget. Wray Herbert in an article in the Huffington Post cites a study conducted at the University of Scotland that showed that the act of forgiving increased the victims’ ability to put the misfortunes out of awareness, that is, to forget. However, when the victims had not found it in themselves to forgive, they were much less successful at suppressing the unwanted memories. What’s more, the ability to forget unpleasantness is linked to actual acts of forgiving, not just an ability to be gracious. So while my brain will remain full of 60’s pop songs, other painful experiences will be lost. But I hope I will recall feeling very blessed and grateful.