I’ve just completed seven weeks of being the primary carer for my wife as she recovered from major surgery. It has all been about giving the body time to heal. It’s been a surprisingly easy journey for me although I’ve had to broaden my range of cooking skills. Previously, as an infrequent cook, I’ve been able get away with having just a few tried and true meals (recipes is too grand a word for my repertoire) – meat and three vegies, spaghetti bolognaise, hamburger. After a couple of weeks as Carer it was clear that this was not going to be enough so I had to journey down some aisles of the supermarket that hitherto have been a mystery to me. 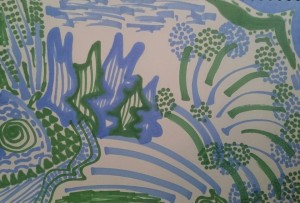 As my wife recovered and had more energy she began to look for activities to engage her mind and pass the time. Increasingly she started to doodle. Starting with a blank piece of paper she would seemingly draw a line at random. Then another and another. Straight lines, curly lines, circles and stars. She would change colours as the mood took her, draw some more, and some more, and some more, until the whole page was full of patterns and colours. She enjoyed this so much that she even ordered from the Internet a large quantity of coloured marker pens to give her more choices and greater depth of colour.

To my surprise, her doodles were always creative and engaging to look at. There were elements of realism embedded in these abstract creations.

According to Sunni Brown, author of The Doodle Revolution, doodling has gotten a bad rap. She proposes that doodling is deep thinking in disguise and that it is a simple and accessible tool for problem-solving in general. In fact, Brown believes doodling spontaneously actually helps you think.

There is a famous story recorded in the Gospel of John about the religious leaders of the day bringing a woman caught in adultery to Jesus seeking to trap him. Jesus’ response is to doodle in the dirt. We read, “Jesus bent down and wrote with his finger on the ground. When they kept on questioning him, he straightened up and said to them, ‘Let anyone among you who is without sin be the first to throw a stone at her.’ And once again he bent down and wrote on the ground.” (John 8:6-8)

Now Jesus was certainly capable of mounting an argument to answer the questions of the Scribes and the Pharisees. But Jesus did not do this. He did not offer an argument. Instead he posed a question and gave the crowd time to think. He bent down and silently drew in the dirt, providing a space in which those in the crowd could examine what was in their own hearts and determine whether it was right to carry out the action of violence which they were contemplating. 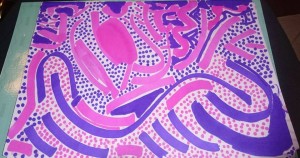 Just as my wife needed time for her body to heal, the crowd needed time to reflect. Jesus believed that with enough time the basic goodness that resides in us all would emerge and would lead them to the right conclusion. And, Jesus’ strategy worked. After a time, one by one, the violent mob dropped their stones and went away.

I like to think that God is something of a doodler, making a meaningful picture of our seemingly random and disordered lives. A splash of colour, straight lines, starbursts, curves and dots; mixing and matching the elements of our lives:- sorrow, joy, achievement, success, failure and shame. God doodling and giving us time to think, to heal and recognise that forgiveness and love are the only things that truly make sense.