A selfie with the Colonel 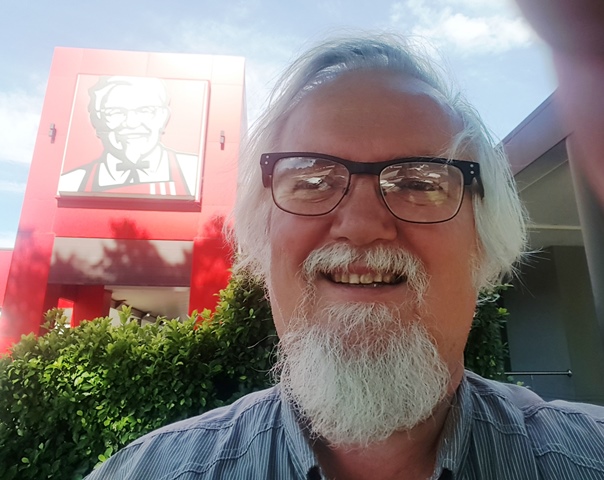 “Do I know you?” he said. The young man in his mid-twenties had just come down the stairs of the hotel when he saw me and my wife sitting finishing our tea. Suddenly his face lit up in a mischievous grin as he turned to his mates and said “It’s the Colonel!”

It’s happened to me before, as I age and my hair has gone grey, I seem to resemble a few famous people. I of course am not famous, but with glasses, longish grey hair and a goatee beard, I have been variously told that I look “just like” Professor David Suzuki, science broadcaster and environmental activist; Rowan Williams, the former Archbishop of Canterbury; and Colonel Sanders, founder of Kentucky Fried Chicken. I don’t mind the associations with Rowan Williams or David Suzuki, but Colonel Sanders- not so much!

As we left the hotel, the four young men were standing on the footpath and we passed by they again made joking remarks about the Colonel. Over the years I worked out what works best for me when someone wants to tease or mock me. I figure there are two basic choices: I can be offended and ask them to stop (Not an approach that worked at Tech school) or I can play along, often choosing to take it further. This often takes the challenge out of the teasing and it stops. When it’s just me and my ego, I tend to take the latter approach. So as we passed them I said, “I’m off to see if I can find some decent fried chicken in this town.” They found this funny, but before I could get to my car one of the young men asked if he could take a selfie with the Colonel. So arms around my shoulders, the four of them were grouped around me and took a selfie. It was good natured, we all laughed and I went on my way. I assume that my moment of mistaken fame now lives on, having been published on Facebook or Instagram.

Do you know me?

“Do you know me?” he said. The man in his early fifties had come to the cellar door to taste our wines. He and his three friends had been sharing a drink outside and had been there for the best part of an hour. He came inside alone to ask me his question. I looked closely at his face, but I hadn’t any idea. Was this another sign of old age? He presumably knew me, why didn’t I know him? Unbeknown to me, in the time he had been here, he had seen my name on a business card, said to my son that he knew a Brian Spencer once, and worked out that it was indeed me. So he had the upper hand. I took the cowards way out and responded, “Your face is familiar.” At this he said his name. We looked at each other again. Smiles beamed. It had been 35 years ago that I had last seen him. I was the minister in the little town of Dareton, near Mildura. He was a troubled teenager finding his way after the sudden death of his father.

We talked about those days, his mother and other mutual friends from all those years ago. We talked about the paths life had taken us down in the years since. Then he hugged me.
A long and strong hug that spoke of deep things far beyond the pleasantries.

Epiphany is divine disclosure—an “aha!” moment when the whole frame of reference shifts and we see something we couldn’t see before that changes the terms of everything else. But before we can get to the Epiphany, we need an attitude of expectation. An attitude that is open to seeing things in a new light. An attitude of waiting and watching. The church call this Advent. Sometimes when I’m struggling with a situation I doesn’t quite understand, I’ll say to myself, “I wonder what God is up to here.” I try to practice expecting God to show himself in the quirky, messy events that don’t make sense.

When preparing his disciples to be ready for his ongoing self-revelation, Jesus makes two promises to his followers: He assures them that “The kingdom of God is among you,” and he comforts them with the promise, “Behold, I am with you always.”

I’m not sure but I think he appeared at my cellar door.