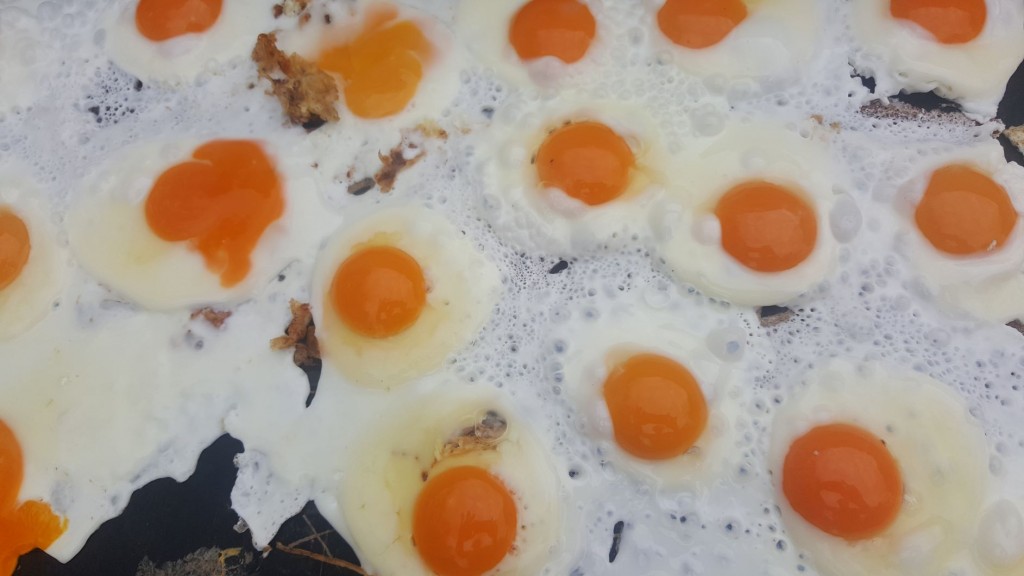 At the Australia Day celebration I attended the SES was cooking breakfast and the BBQ plate was filled from edge to edge with dozens of eggs – all sunny side up. These were for the people who had come out early to mark the day and recognise those in their community who had contributed significantly to making it a better place to live. I was struck by the optimism and energy that exists in people in our communities who overcome personal difficulties, or are even inspired by misfortune and accident to make a difference.

Growing up in the 1950’s and 1960’s in Australia in the early days of television (black and white of course) Saturday night’s were spent watching a variety program called Sunny Side Up. It was bright, cheery, home grown, live television. The program was hosted by race-caller and radio broadcaster Bill Collins, with comedy by Syd Heylen (Sydney from Sydney), Honest John Gilbert, Syd Hollister, Maurie Fields and a host of other performers who were trying to find their way into this new medium. Remember TV was only introduced into Australia in 1956, just in time for the Melbourne Olympics. Facebook has been around longer than TV had back then. TV and its potential impact on family life was as controversial as any of the social media apps of today.

The signature song for the program was Sunny Side Up, a song originally performed by Judy Garland. I don’t remember all the song, but the chorus still sticks in my mind.

Keep your sunny side up, up,
Hide the side that gets blue.
If you have nine sons in a row,
Baseball teams make money, you know!

The lyrics themselves are appalling, but had that characteristic attitude of the era urging the listener to bury their feelings, particularly their hurts and brokenness, and instead smile and look on the bright side. There is certainly something to admire about a generation that came through the great depression and World War II, determined to move on and make a new life. These were people who lived through a time of terrible suffering and undreamt of invention.

I’d like to think that we are better at expressing and dealing with the hurts and disappointments of life than perhaps many of my parent’s generation. It’s healthy to acknowledge the suffering and feelings of powerlessness that come to us when we have been attacked, injured, cheated, fooled, or harmed.  But there are some people who feel like victims all the time, regardless of their circumstances. They maintain a consistent victim identity. To live the good life, we do need to move on and get past our hurts and brokenness, even if we can never quite “get over it”.  As I said I am particularly inspired by those who use personal tragedy as a motivation to build a better world.

When troubles come, as they do, we should never feel that somehow God has turned against us. The apostle Paul reflected often on the troubles and persecutions that had come his way and declared that there was nothing that could happen to us, that God could not turn for the good. He then got all poetic and wrote this:

“Do you think anyone is going to be able to drive a wedge between us and Christ’s love for us? There is no way! Not trouble, not hard times, not hatred, not hunger, not homelessness, not bullying threats, not backstabbing, not even the worst sins listed in Scripture.  None of this fazes us because Jesus loves us. I’m absolutely convinced that nothing—nothing living or dead, angelic or demonic, today or tomorrow, high or low, thinkable or unthinkable—absolutely nothing can get between us and God’s love because of the way that Jesus our Master has embraced us. (Romans 8: 35-39 The Message)

So keep your sunny side up!