Maybe it was the light 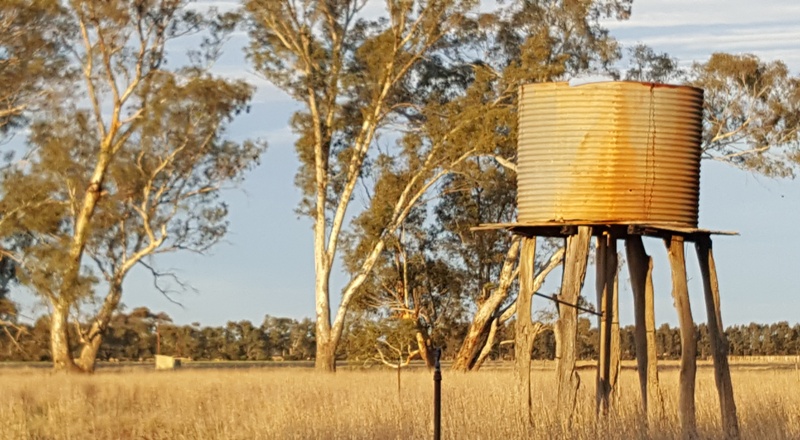 It’s funny how I can drive up and down this road for the past 2 years (Barnadown to Epsom) and one day see something new or see it in a new way. The Barnadown to Epsom road is a narrow strip of bitumen that links up with the Toolleen Angle Road at one end and with the back road to Eaglehawk at the other.

My wife Cynthia and I live and work about 40 minutes’ drive away from each other so we spend a fair bit of time commuting between each other’s houses. Most often this means that I’m rushing to keep to some promised time of arrival. Most often these drives are done at dusk or early morning, which means one of my primary concerns is scanning the roadsides for signs of kangaroos that haven’t got the good sense to stay put until I pass by. Such driving makes for selected vision. If it isn’t moving, ignore it!

But the other day it was different. As I zipped along I noticed out of the corner of my eye an old corrugated iron water tank perched precariously on long wooden poles that were nearing the end of their useful life. And it was beautiful. Then it was gone, or rather I was gone.

The moments of indecision about whether to stop or continue are an instant examination of my values and beliefs about living in the now. It feels like an elastic band is drawing tight but it will take just a few moments of indecision for the band to break. There is a temptation to say “Next time.” but there is also the fear that the moment will be gone and I will forever wonder if I’d missed out on something special. Today the elastic band is strong and I stop, turn around and go back.

The sun is low in the sky and brings out the colours of the rusting iron. The sugar gums in the background, the dry grass, the weathered fencepost, the rusty barbed wire frame the tank. The remains of what was no doubt once a cutting edge sprinkler system stands as a pointer to the role this tank must have fulfilled in a former time and speaks of initiative, hope and hard work. The water tank and its stand are striking in the soft evening light.

Too often we go through life too focussed on seeing what we want to see. Too 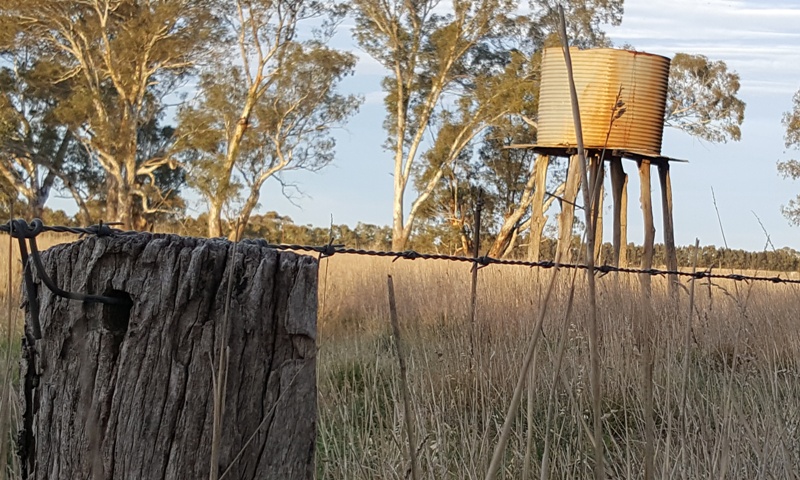 often we think we can go back later. Too often ‘later’ means ‘never’ or that the moment has passed. Significant conversations with friends and family that never happen. Celebrating the little moments of achievement and transcendence that appear in the peripheral vision of our busy lives. Jesus often complained that his disciples missed the moment, ‘Do you still not perceive or understand? Are your hearts hardened? Do you have eyes, and fail to see? Do you have ears, and fail to hear?’ (Mark 8:17)

Perhaps it was the light, perhaps it was that I wasn’t pressed for time. Or maybe I was ready. Anyway I’m glad I saw the ordinary in a new way and took the time to stop and turn the car around to appreciate and capture the moment.

Thirty minutes later I am standing at the checkout at the Epsom Woolworth’s supermarket. The young man serving me is chatty. “What’s happening?” he says. I chat a little about my day and then decide to ask him about himself. “So, what’s happening with you?”

His reply takes me aback a little. “Oh nothing much, just working here a bit. I haven’t slept in three days.”

Dare I ask the obvious question? If so how? After a pause I say “Three days! What’s with that – studying, partying, drugs?”

He tells me it’s prescription drugs. He is actually a youth worker. He has been suffering depression. The original drugs the doctor gave him were not working so they swapped him onto another, but the side effect has been that he cannot sleep. He tells me he went back to the doctor but it will take a few months to wean him off the drug, because if he comes off it too quickly it causes suicidal impulses (‘Suicide Ideation’ in his words). He says he has been having suicidal thoughts and it’s tiring fighting them. I listen, unsure of how to respond. “Keep fighting those thoughts”, I say. “Keep telling yourself that life is a long time and everything will pass. And get back to your doctor.”

He assures me that he is and he will. As I collect my bags our eyes meet and I say “Take care.”