No fruit on this tree 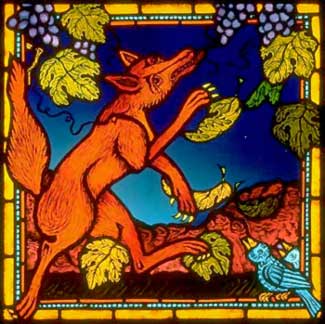 Sometimes I’m more inspired to exercise by the sight of a fat man jogging than an Olympic athlete talking about their achievements. In an old fable by Aesop a hungry fox noticed a bunch of juicy
grapes hanging from a vine. After several failed attempts to reach the grapes the fox gave up and insisted that he didn’t want them anyway because they were probably sour. Nowadays when somebody talks about sour grapes, it means that they put down something simply because they can’t have it. So when I say that the Olympic athlete probably doesn’t live a very balanced life it’s probably sour grapes.
Sour grapes have been on my mind a lot lately because I don’t want any. My little vineyard is almost ready for harvest and every couple of days I’m out there, testing the sweetness of the grapes. Are they ready? Not quite? Be patient.
The crows think the grapes are ripe. Every morning and afternoon a hundred or more big black crows descend on the vineyard to eat the ripening grapes. Birds always seem ready for fruit long before humans are.
The exception to this of course is a fruit tree on public land. Down one of the back roads between Redcastle and Colbinabbin there is a large fig-tree growing beside the road. It’s in a dip in the road, which both obscures it and means it gets well-watered after rain. It is something of an open secret among locals and we look forward to picking lovely ripe figs in season. But there is always someone who, for whatever reason, picks the fruit early. Maybe out of fear that they will miss out to the birds or the greed of others. Despite it being on public land, it’s surprising how many of us locals think we have some rights to its fruit and feel robbed when someone dares to pick all the fruit for themselves.
There is a famous and seemingly difficult story of Jesus cursing a roadside fig-tree because it didn’t have any fruit on it when he went searching among its branches. It’s all the more shocking because we are told that “it wasn’t the season for figs.”
The point of the story was that he considered the authorities and religious leaders of the day as being like the fig-tree – all show and no fruit. Always looking promising, but never delivering. Justice, mercy, grace, liberty of the oppressed, help for the poor were all great ideas but the “season” never seemed to come. The tree never bore fruit.
As Australians we like to think we are a great nation: the land of “fair go”, equality, mateship and opportunity. These are great ideas but are in danger of being lost because it is not the season for such fruit.
Big business and the economy must eat first. Those with disabilities must wait. Refugees can rot on Nauru and Manus Island, unemployed people are treated like criminals, and criminals are treated as beyond redemption.
Jesus would curse this fig-tree.