Maps are interesting things. Unlike a book, there is no universally agreed way to “read” a map. Personally I like to leave them as they are printed with North to the top of the page, but my wife turns the map around and almost lays it flat on her lap so it looks as if she is looking down the road we are traveling on. What amazes and disappoints me is that I care. I think she is doing it wrong! But of course it doesn’t matter as if either of us is left to our own way of doing things the map will get us to where we are going. The maps will have various features marked on them; towns, major and minor roads, but no-one is under any illusion that the map is the actual territory. It’s just a way of navigating the territory. It’s a guide for us and anyone else who travels an unfamiliar path.

Why is it then that when it comes to words we so often fall for the trap of thinking that the word is the same as the thing it describes. We fight about words. We declare some people to be right and others wrong. Let someone use a poorly chosen word to describe what they think of someone or something dear to your heart and they will be taken to task, we will be offended, we will argue. Just the other evening a mate and I were talking world politics and our voices became a little louder and faster, our gestures more animated and people on the other tables were starting to go quiet as they listened in on these two old geezers trying to get the other to see things his way. Then my 24 year old son, with all the wisdom of youth pointed out that we were in furious agreement. We were getting stuck on the words. One of us was turning the map on its side, but we were saying the same thing. We had failed to see that the words were just a way of navigating the territory, they were not the reality. 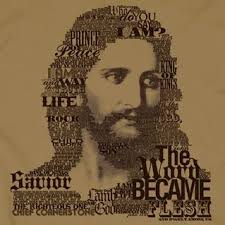 People of faith often argue about words. Christians use many words to describe God; Creator, Father, Son, Redeemer, Saviour, Messiah, Spirit, Shepherd, Lord, and many more. These days many include Mother in that list. But these are simply words, in their day most of these words were not even particularly religious words. They are metaphors, word pictures that provide for creativity, diversity, and experimentation while recognising that anything that we say about God is partial, fragmentary and incomplete. The words are not the reality, they are maps that guide us on our journey. The Gospel of John describes Jesus as the Word become flesh. Jesus is the embodiment of all those things we believed and hoped about God. The words of faith; love, grace, forgiveness, hope, abundant life; come to life in Jesus. In Jesus the Word became flesh and lived among us.