God loves those who try

It’s Olympics time again. The opening ceremony is complete in all its spectacular celebrations and we have watched the nations of the world (minus a few Russian drug cheats) march in joyful anticipation of fulfilling a life’s ambition. Excited, hopeful, confident and afraid all at once.

I do like the Olympics. It’s inspiring to see someone achieve what appears to be unattainable. The idea of doing what most Olympians do is hard to comprehend. But when we get to see it, it evokes a sense of wonder and it restores our faith in humanity a little bit.  The daily news diet of terrorism, murder, politics and economic and ecological disasters gets pushed aside while we feast on a celebration of human potential. It’s transcendent to watch someone do something amazing, beautiful, a little bit closer to perfection.

One thing that leaves me feeling uneasy is 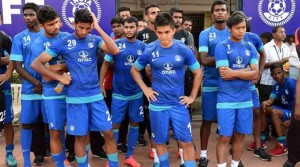 when people thank God after they win. I’m not sure why it irritates me, but there’s something about it all that suggests God plays favorites, that God loves winners more than the ones who lost. It’s understandable being caught up in the excitement of the moment and wanting to offer some word of thanks to God. But I reject the way we link success and victory. It plays into a perception of a God who rewards the good and that somehow those who didn’t win are either less loved or less worthy.

I’m not saying that God isn’t on the side of those who emerge victorious. Look at David, taking on Goliath with a slingshot. But for the most part, God – and Jesus in particular – seemed to be fond of the also-rans, the underdog, those who “run the race” and participate. Peter and the disciples were slow learners, yet God built the church with them. Paul wrote much of what became the New Testament, but he had a checkered past and he clearly wrestled with demons his entire life. Then there’s Jesus himself, hanging out with the losers, the sick, the criminals; the kind of folks you would not likely see climbing to the top of the medal stand.  And although I like to identify with the big winners, more often than not my heart lands in the losers’ camp too.

The story of Jesus from his humble beginnings, to his betrayal, and death and resurrection is not as simple as a come-from-behind victory like the ones so often celebrated in the sports world. Life deals us all sorts of hands. We don’t always win. We need never lose. God is with us come what may. Extract from every experience what you need.

This is the Gospel and it’s good news.
Brian Spencer, Minister