We went to church in The Kimberley last night. Halls Creek is in the southern Kimberley region of Western Australia. It’s about 2500km from Perth, 800km east of Broome and is near to the Northern Territory border, with a population of around 1200 people. When I ask Google Maps for directions to Canberra, it tells me that there is no route.

My wife, Cynthia, and I are visiting my friend Stephen who is living in Halls Creek while working for Child Protection.

The Catholic Church at Halls Creek is a small and unpretentious building. No stained glass, no soaring ceilings, just a square building with roller-doors on three sides which are opened up to allow the breeze through and provide the added bonus of allowing one to become distracted and inspired by red earth, gum trees and Sturt Desert Peas. It’s a small congregation, maybe 20 people; mostly Aboriginal, some Indian, some Anglo.

Fr. John leads the service. In his mid-40s, he is a Jesuit trained priest who looks like he would make a good accountant. His robes pay homage to the local Aboriginal imagery that has been incorporated into the traditional Christian symbols. The service is ‘Missi Kimberley’ – the Church here has taken advantage of the reforms of Vatican II and developed an indigenous service that is fresh and accessible. As part of the Prayer of Confession, a young Aboriginal girl brings forward a wooden bowl of water which has a small eucalypt branch in it. After the confession Fr John walks through the congregation sprinkling the new life which comes from water in the desert upon the congregation. 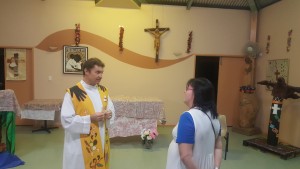 Fr John has a bright upbeat voice. He talks quickly and forthrightly. He tackles a difficult Gospel passage and quickly takes aim at “some Evangelicals” (present Uniting Church company excepted!) and the conservatives within the Roman Catholic Church.

Fr John is someone who is confident in his own authority. No referencing his statements against Papal statements, no equivocation, no mincing of words. Just straight to the point, clear language. For a moment I have an insight into how it might have felt for those people in Galilee when Jesus spoke in their synagogue. “They were astounded at his teaching, because he spoke with authority” (Luke 4:32) Far from the centre of power, among the poor and the powerless, this preacher speaks with authority, condemning those who mislead and those who lack the courage to question the status quo.

The verbal take home message wasn’t clear but I think it was this: we are loved, we are forgiven and we should set the world on fire with radical loving action that questions everything.
Oh, and Fr John has got your back!