Since late October I’ve been watching a pair of wood ducks nurse their brood of ducklings to maturity. I have a large dam at my house and each morning I can look out the kitchen window and watch the duck family warming themselves in the morning sun. There were nine ducklings to start with. In other years, I’ve watched as the number of survivors drop rapidly. This year it was a wet spring with plenty of insects about (remember the mosquitoes?) and grass to feed the growing family and so I was pleasantly surprised to see seven of the original nine make it through.

Through to flying, that is, because the ducklings learn to walk, then swim, very quickly. Like a duck to water. But flying is another matter entirely. How does one learn to fly? Birds that spend their entire early lives perched high in a tree in nests don’t have much option when the time comes and they are kicked out of the nest, but ducks living near a good body of water have no particular need to fly at all. They find most of their food by swimming or grazing on the bank. They can find safety from most predators by simply taking to the water and flying must consume a lot of energy.

So why fly? I think the young ducklings must have shared my logic because they showed no interest in flying. They kept growing and eating and swimming and resting around my dam. By late December the ducklings were hard to distinguish from their parents except for the fact that they didn’t fly. 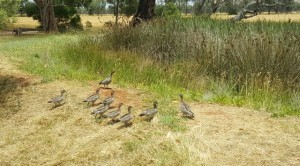 My eldest son has just turned 40 years old. He and the rest of my children have well and truly flown the coop. He lives in the city and I don’t get to see him nearly as often as I would like to but I think of him every day and I take pride in who he has become and is becoming.

Your children are not your children.
They are the sons and daughters of Life’s longing for itself.
They come through you but not from you,
and though they are with you yet they belong not to you. 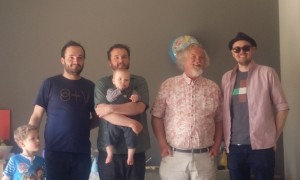 You may give them your love but not your thoughts,
for they have their own thoughts.
You may house their bodies but not their souls,
for their souls dwell in the house of tomorrow,
which you cannot visit, not even in your dreams.
You may strive to be like them,
but seek not to make them like you.
For life goes not backward nor tarries with yesterday.

You are the bows from which your children
as living arrows are sent forth.
The archer sees the mark upon the path of the infinite,
and He bends you with His might
that His arrows may go swift and far.
Let your bending in the archer’s hand be for gladness;
for even as He loves the arrow that flies,
so He loves also the bow that is stable.

God bless all you “empty nesters” as you learn to fly again.