Something is beeping in my house, and I can’t figure out what it is. It sounds very much like a smoke alarm, but we have three and I’ve stood under all three of them while the beep goes off in some other part of the house, and it doesn’t seem to be any of them. I’ve stood next to the microwave and the clothes dryer – no not them. When I go outside I can hear a faint beep from inside. When I go to the lounge room sounds like it’s in the kitchen, and when I go the kitchen it sounds like it’s in the lounge room. It’s not the computer. If my wife didn’t hear it too, I’d swear I was going mad.  I hope whatever it is, it’s not trying to tell me about something potentially dangerous. And I hope it shuts up soon. 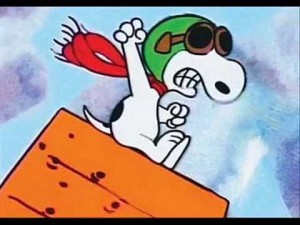 out some word that was deemed too offensive for the public to hear. Back in the mid 1960’s there was an otherwise completely harmless song called “Snoopy verses the Red Baron” sung by the Royal Guardsmen. The Red Baron was Manfred von Richthofen, who was a German fighter pilot during World War I. He is considered the ace-of-aces of the war, being officially credited with 80 air combat victories. Snoopy is Charlie Brown’s pet beagle in the comic strip Peanuts by Charles M. Schulz. Snoopy is a loyal, innocent, imaginative and good-natured beagle who is prone to imagining fantasy lives, including being a World War I Royal Flying Corps ace. He was often drawn sitting on top of his Sopwith Kennel, wearing an aviator’s helmet and goggles and a scarf. When the Royal Guardsmen recorded the novelty song it went to No1 in Australia for five weeks in 1967. But at certain points in the song the lyrics were beeped out. The offending words being “bloody Red Baron” which became the “beep Red Baron”. There was some debate about whether the use of “bloody” in this context was a swear word or a legitimate adjective considering the Red Baron’s combat victories.

Back then that was about the only “beep” one heard. Now I almost lose count of the things that go beep around me in my daily life. Someone has decided that a high-pitched beep is the best way to tell me that the microwave has finished heating up yesterday’s leftovers; to remind me to put my seatbelt on; to warn me that the forklift/truck/etc is in reverse; to wake me from my slumber; to advise me that I can’t do whatever it is I’m trying to do on my computer; to warn me that the house may be on fire or that I have burnt the toast. And of course, dishwashers, clothes dryers, voicemail, failing batteries, ovens etc, etc all want to warn or prompt me. I think their role is to replace my mother or perhaps strengthen my conscience.

Although beeps are incredibly useful in certain situations, they are also incredibly annoying in most circumstances. Do I need so much warning? Is the world such a dangerous place? Why has hearing been singled out? What happened to the other four senses of taste, touch, smell and sight? Are we so unobservant? The message seems to be that humans are lazy and inattentive and need to be reminded to do the right thing.

I’m not sure that I like this insight, but I suppose Jesus was always telling his disciples to listen.
“Let anyone with ears to hear listen!’ And he said to them, ‘Pay attention to what you hear.” (Mark 4:23 -24)

I think I’ll need to pray about this.