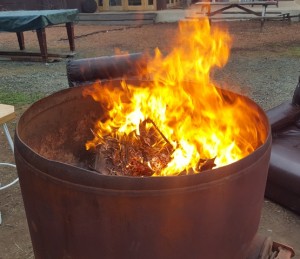 We have a couple of fires at our place to provide warmth over the cold days and nights of winter. My favourite fire is the large outdoor brazier I made from an old water filter. It is about 1 meter in diameter and about the same in height. It is made of thick steel and had holes in the bottom to allow it to draw. It can take some pretty large logs and creates enough heat for a dozen people to stand around to warm themselves, talk or just stare into the fire. Our other fire is a more conventional slow combustion heater in the lounge room of our home.

But regardless of what sort of wood fire you have, if you want it to work effectively you need to tend it. Electric and gas heaters may be “set and forget”, but you need to tend your fire. It may be burning brightly now, but if you ignore it for too long you will either have a fire that goes out or fails to heat the way you were hoping it would. Sometimes it is as little as a poke with a stick. Sometimes it’s adding another log. Sometimes there is enough wood, but it needs rearranging. Sometimes it needs more air, sometimes less. But it needs to be tended.

Tended is a funny word. It seems to roll off my tongue when I talk about a fire. But is also used in a nursing context as in “the nurse tended to his wounds”. It’s a word that evokes a sense of gentle caring as in “loving tender care”.  But it also has the sense of being alert to, as I “paying attention”.

The ability to tend fire is often considered to be a turning point in human development.  Before we could flick a switch to create light, it was crucial to be able to start and maintain a fire. It could be a matter of life and death. Keeping a fire meant having light and warmth, as well as being able to cook. As such fire was a necessary and important part of ancient human civilizations, and often was invested with religious meaning. In the past world of no matches, and no easy ways of making fire under wet conditions, it was necessary for someone to keep the flames or red coals burning for long periods of time. In some tribal communities they would take turns, day and night, tending the sacred fire. 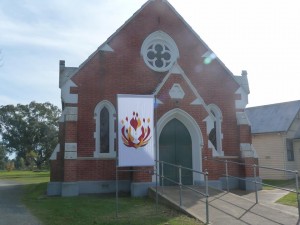 Jesus talked of the Holy Spirit as fire. On the day of Pentecost, it was reported that “tongues of fire” appeared over the disciples heads. Most of us know in our hearts that the most important things in this world are not things. There is the material world of things and there is the non-material world of love, trust, loyalty, hope, joy, peace, belonging and forgiveness. They are as ephemeral as the flame of the fire and they are what we talk of when we talk of spiritual things.

Any burning log, once it is removed from the fire will go out. In the company of other logs and coals it will burn brightly. On its own it will gradually cease to burn.  We need to tend the fire.  Relationships whether between friends, family, community or God need to be tended. The non-material world of love, hope and faith is always in danger of being swamped by the urgencies of our material needs. When reflecting upon their encounter with the risen Jesus on the way to Emmaus the two previously down beaten disciples are reported to have said, “‘Were not our hearts burning within us while he was talking to us on the road, while he was opening the scriptures to us?’

Fan the flames of faith in your life.