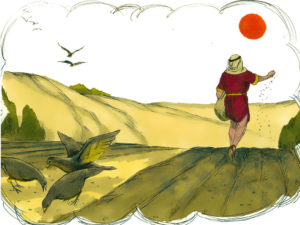 Such a great multi-layered story.

The sower cast the seed around
On paths, and rocky soil as well
Some landed down among the weeds
And some in fertile soil fell.
God’s living word is often heard
when we are busy with life
among the din, we take it in
or let it pass into the night

The seed that on the path did fall
was in a risky circumstance
the birds swooped down and ate it all
It never really had a chance.
And some grew fast, but didn’t last
they were in shallow soil
among the weeds, the growing seeds
were choked and all hope spoiled.

Some seed fell on the fertile ground
and put down roots into the soil
the plants grew tall and strong and sound
a just reward for farmer’s toil.
They put forth grain, a mighty gain;
thirty, sixtyfold and more
Christ’s word can start, to change one’s heart
and open heaven’s door.