The mystery of disappearing dirt 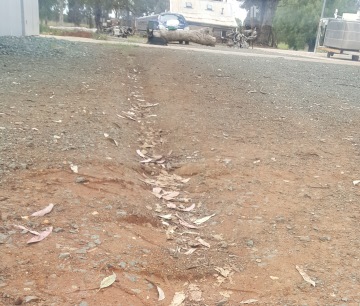 I’ve been digging a lot of holes lately. Trenches to be exact. To lay poly-pipe to carry water around the property. My problem is that when I go to put the dirt back in the hole that it came from there is never enough to fill the hole and I’m left with a depression along the trench line. It’s not that I’m careless, I try to keep track of the dirt that I’ve taken out of the hole, I try to refill it as soon as possible, but however I do it, there is never enough dirt left to fill the hole back to the level it was to begin with. Where does the extra dirt go?

My scientific approach to this situation has me hypothesize that either there should be enough dirt to fill the hole to the level it was at before, or more likely, have excess dirt thanks to whatever I planted or put in the hole taking up extra space and the formerly compacted soil now having additional air and the lumps stopping the dirt from filling the hole as neatly as it was before I dug it out. So my reasoning says that there should be more than enough dirt to fill the hole, but there isn’t.

It appears to me that more dirt than I think must be scattered or get caught in the ground around the hole. Perhaps my compacted soil isn’t as compacted as I thought. Maybe it already has air holes from worms and bugs etc.

I’ve read that some people believe that the moon, through its rotation around the earth and its effect on our gravity, could affect how loose dirt goes back into a trench. But that seems far-fetched.

I’ve decided that problem is not with the dirt; the problem is with me. I want to able to dig around, bury my pipe and then have everything return to normal without any trace of what I have done. The truth is these little dips in the ground are neither dangerous nor detrimental. They are simply scars in the ground and I’ve decided to think of them the same way I regard the scars on my arms, hands and legs. Most people accumulate a number of scars on their body as the result of injuries and accidents through their life. Part of me would like the skin to heal without a scar, but that is not the way our bodies work. Each of my scars tells a story. As I look at them I remember times, places and people and often the moment that that skin and flesh were torn. They have become part of my story. Most of us also carry emotional scars from life’s hurts and hardships. Sometimes the body heals better than the soul.

Scars are not shameful, they say we have lived. They are healed wounds, not running sores. When Jesus reappeared to the disciples after his crucifixion and resurrection, we read that “he showed them his hands and his feet.” (Luke 24:40). I suppose it would not have been surprising if the resurrected Jesus had miraculously healed without scars, but the scars proved he was the same Jesus whom they had followed and that pain and suffering are not to be avoided, but transformed.

The apostle Paul put it this way; “We a pressed on every side by troubles, but not crushed. We are perplexed, but not driven to despair. We are hunted down, but never abandoned by God. We get knocked down, but are never destroyed. Through suffering, our bodies continue to share in the death of Jesus so that the life of Jesus may also be seen in our bodies.” 2 Corinthians 4: 8-10