Sometimes my week gets hijacked by completely random events.  It was mid-afternoon on a showery Monday and I had just retreated into the office to attend to some computer work when I heard someone call from downstairs. I went down to find a woman who explained that she and her two friends were on the way to the airport to catch a plane.

The road that fronts our property is a secondary road and, being bitumen and in good condition, it is often used by people in a hurry who want to want to travel at a speed of their choosing without being challenged by people in uniform. 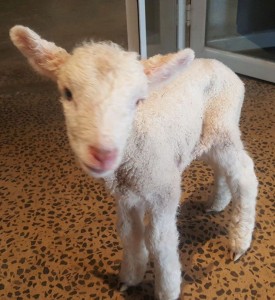 While these travellers were in somewhat of a hurry, they had passed a very young lamb standing by the side of the road in the drizzling rain. Being of compassionate heart, they stopped. With no other sheep in sight they decided to pick it up. But now what to do? They had a wet, day old lamb and they were rushing to get catch a plane. It seems mine was the first place they saw. “Here, can you take this and look after it?”

One of the most well-known stories told by Jesus is that of the Good Samaritan. (Luke 10:25–37) Jesus apparently tells the parable in response to the question from a lawyer who asked, “And who is my neighbour?” after an earlier statement from Jesus that “You should love your neighbour as yourself.” Jesus tells a story about a traveller who is stripped of clothing, beaten, and left half dead alongside the roadside. First a priest and then a Levite come by, but both avoid the man. Finally, a Samaritan happens upon the traveller. Samaritans and Jews generally despised each other, but the Samaritan helps the injured man and Jesus concludes the parable by stating that the Samaritan, who helped the injured man was the neighbour in the parable.

The parable has inspired painting, sculpture, satire, poetry, and film. The colloquial phrase “good Samaritan”, meaning someone who helps a stranger, derives from this parable.

When the Good Samaritan had bound up the wounds of the beaten traveller, he is said to have taken him to an inn and asked the innkeeper to look after him. He gave the innkeeper some money and said he’d be back and fix him up for any additional expenses. I’ve read and reflected upon the story of the Good Samaritan countless times and never really considered it from the point of view of the innkeeper. He was co-opted into this act of compassion and, despite the monetary compensation, no doubt his day, perhaps his whole week, had to be re-organised.

My week as innkeeper has been a week of glorious distractions and compulsions. Babies, whether they are of human or animal variety, are invariably cute and beautiful. We have purchased milk formula, bottle and teat. We have fed and cleaned up after our adopted lamb. We have watched it bond with our two-year-old kelpie dog. We have wondered about the competing influences of instinct over learning (nature vs nurture) as the wolf has laid down with the lamb, then bitten it in response to the lamb trying to suckle! We have laughed as they played together and marvelled at how quickly it develops new skills. Fortunately, my daughter-in-law has a very soft spot for animals and has taken the brunt of the caring burden.

All the while, the story dominating the news and social media this week is to the contrary, it is about the leaders of our country showing a lack of compassion. Australia has “closed” the Manus Island detention centre and the hundreds of men have barricaded themselves in, refusing to move to the “transit” accommodation in nearby Lorengau for fear of what awaits them there. All Australian security personnel and essential services have been withdrawn, leaving the men to fend for themselves. While that story unfolds I hear the lawyer ask, “And who is my neighbour?”

This is the gospel, and it disturbs me.