Stuck at the gate 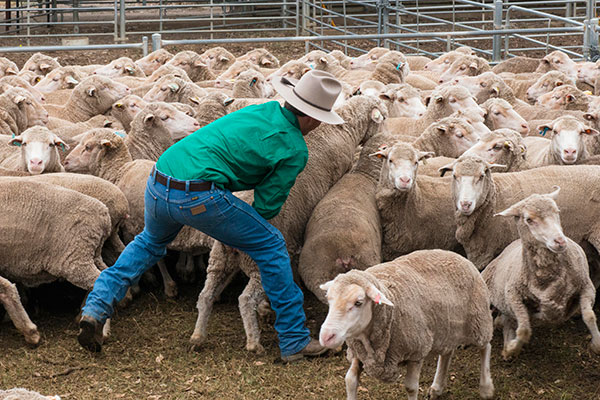 ne our farmer church members was relating to me how he had a mob of cross-bred Merino-Suffolk sheep that he was trying to drove from one paddock to another. He is a fourth generation farmer so he knows a thing or two about sheep and farming. He also has all the right equipment and working dogs to make the job easier. But despite this wealth of knowledge and know-how this mob of cross-breds had him stumped. He could get them to the gate, but they would just not go through. They milled around, he pressed, the dogs were doing what they were bred to do, but the sheep stayed put. When he tried to force the issue they, turned and scattered in all directions, pushing past the dogs, the bikes and the frustrated farmer wildly waving his arms and shouting.

Contrary to what you may have heard sheep are not stupid. They rank just below the pig and on par with cattle in intelligence among farm animals. Sheep react to the situations they are placed in according to instincts that have been developed over centuries. But sheep are hard-wired to follow the sheep in front of them and there is a certain pecking order or perhaps “butting order” whereby the dominant animals act as leaders. So if the dominant sheep won’t go, the flock won’t go. To make matters worse sheep have poor depth-perception so they have a hard time distinguishing a partially open gate along a fence line. Unless of course it’s been left open by accident and you don’t want the sheep to go through it!

Rob’s solution was to get another small mob of (more compliant) Merino sheep and mix them with the cross-breeds, drive the now larger mob through the gate, then draft off the Merinos. It sounds complicated, but it left me feeling a whole lot better about my poor sheep handling skills. Sometimes sheep make the best of us embarrassed.

The metaphors of sheep and shepherds roll though the Jewish and Christian scriptures from that most well-known poem, Psalm 23, identifying the “Lord is my shepherd” and culminating in Jesus saying “I am the good shepherd.” But there is also a more obscure metaphor where Jesus says that he is the gate. “Very truly, I tell you, I am the gate for the sheep. All who came before me are thieves and bandits; but the sheep did not listen to them. I am the gate. Whoever enters by me will be saved, and will come in and go out and find pasture. The thief comes only to steal and kill and destroy. I came that they may have life, and have it abundantly.” (John 10: 8-10)

Yes, Jesus is the gate: the way, the truth, and the life. Abundant life is found through him, but sometimes we, like sheep, have a hard time recognizing the gate when it’s right in front of us!

I have studied theology and had my share of “book learning”. Yet I know that parts of Jesus’ message will make much more sense to those from the school of hard knocks who learn more about discipleship by herding sheep, cleaning houses, tending orchards, and driving trucks than I will ever learn from a book. There will always be aspects of our faith that well educated, city dwellers will just not understand, appreciate, or realize. In these rural stories, Jesus embodies the kingdom of God in which the powerful are humbled and humbled are lifted up.