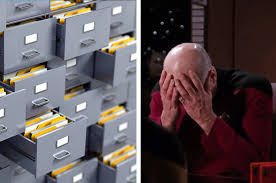 I wrote recently (Salvation is in the Details) that many grand plans fail because of poor implementation and that if the world goes to ruin, it won’t be because someone invented a bigger, better bomb, but because someone installed a cheaper shoddier switch.

People suspected someone high up in government was leaking the information. Others speculated on even more devious and evil reasons. The truth is they were found in two, locked, second-hand filing cabinets sold off at a Canberra auction house which was selling ex-government furniture. The new owner decided to drill out the locks and see what lay inside.

The grand plan to protect national secrets came undone through a series of minor details. Someone lost the key to the filing cabinets in which they were stored. Presumably, with the passage of time, day to day responsibility for maintaining the files fell to someone quite junior, perhaps that person moved on to another job or was made redundant. Eventually no-one knew where the keys were and no-one could remember what was in the locked cabinets. Perhaps they thought that they couldn’t be important because no-one had looked for them for years. In my mind I see a new office manager wanting a clean-up and to create more space. Junior staff are tasked with de-cluttering the office. Maybe they even got praised for their initiative.

My fear is that in the investigation into how this happened blame will be focussed on someone quite junior. They say a chain is only as strong as its weakest link. It doesn’t matter how strong the rest of the chain is, when one part of the chain fails, the chain has failed. Our job is not to get rid of the weakest link, and maybe not even to strengthen it, but to respect it. The fuse wire in our house is the weakest link in our electrical supply. Its very weakness protects us.

Jesus was very fond of the weakest members of society. Jesus used the phrase “The least of these” to turn our ideas about power and privilege upside down. It’s too easy to assume that those with more—more power, more money, more prestige—are the ones who most deserve our attention. Jesus says it’s those with less, those who occupy the least powerful, least noticeable rungs on society’s ladder who deserve our attention. Those who are hungry, naked, imprisoned, vulnerable.

He goes a step farther to say that these vulnerable people aren’t merely our brothers and sisters who need our help, but that they are Jesus himself. Christians are fond of saying that we are Christ’s hands in the world. But in Matthew 25, Christ’s hands are not the ones offering a cup or a meal or a coat; Christ’s hands are the ones reaching out in desperate need to be filled.