The lies I tell myself

There wasn’t much rain through this last Summer, indeed it’s been one of the driest of Summers, but it doesn’t take much for annual weeds and prickles to take their chance to grow. As a gardener and farmer I hate weeds, but I also admire their tenacity and ability to seize any opportunity to grow and spread their seeds. 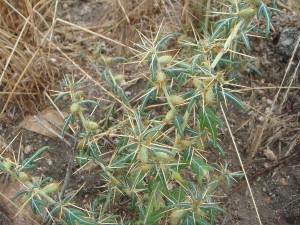 It’s the prickly weeds that have my attention lately, Bathurst burr in particular. We have been fortunate not to have any bindi-eye/three-corner jack, or artichoke thistle and I don’t take too much notice of Scotch Thistles, but Bathurst burr is nasty and a single plant can carry a huge seed bank.

It is a particularly ingenious design with long needle-like spikes protecting it from being eaten and the almost Velcro-like small barbs on the seed pod attach themselves firmly to socks and sheep and ensure that the plant spreads across the paddock.

If we are vigilant early in the season young plants can be sprayed with a herbicide, or slashed, but if they set seed, then the only really effective way to control them is to chip them out, gather the plants and burn them. This is laborious work. Given that my paddock is over 100 acres it is a task that seems overwhelming.

My approach with large tasks like this is to lie to myself. I tell myself that I will only attack the worst infestations. This lie gets me out and doing something. The second strategy I use is to do a little weeding often. It’s an hour and a half every day sort of job. Once I’ve started, and once I’ve established the routine, my pride kicks in and I want to finish the job. My vigilant eye scans the paddock for them continually. Of course it’s never really finished. We can never completely eliminate the weeds, but we can control them.

Weeds have often been seen as metaphors for problems and defects in life. As I’ve chipped the Bathurst burr I’ve had plenty of time to reflect. Here are a couple of my observations.

There is a quote often wrongly attributed to Goethe, which goes like this:

“Whatever you can do, or dream you can do, begin it. Boldness has genius, power, and magic in it. Begin it now.“

After Jesus had left them, it was up to the disciples to carry forward his mission and ministry. It was a huge task for which they seemed particularly unsuited. But their witnessing of the resurrection and the conviction that Jesus continued to empower them led to a boldness that changed the world. Previously what challenged by the authorities, they had run. But not now.

“Now when they saw the boldness of Peter and John, and perceived that they were uneducated, common men, they were astonished. And they recognized that they had been with Jesus.” Acts 4:13