I blame myself. I should have stopped it earlier. Nipped it in the bud before it came to this. But it was summer and it didn’t seem to matter. We were free and easy. But now, with overnight temperatures falling to single digits, the clandestine stealing of the doona in the wee hours has become a matter of contention. 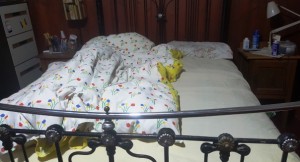 So now we are enmeshed in a silent, under the cover of darkness, under the covers tussle. She has a remorseless technique, like a ratchet. Each time she rolls over her arm seems to lock onto the doona and wind it around her. If I try to gently pull the doona back it won’t budge. If I pull harder she wakes and accuses me of the very crime I am trying to redress.

We’ve been married for over 30 years now, so I feel we should have resolved this many years ago. I’ve gone back and checked our marriage vows just in case, in the flush of young love, I gave away my rights to a good night’s sleep or a fair share of the doona but there was no “for warmer or cooler, in flannelette or in satin.” Just the usual stuff.

IKEA are now trying to educate Australians on the concept of a dual-doona, releasing a set of doonas designed to be used by couples who share one bed. See, the good people of Sweden have taken their “Allen’s Key” engineering minds and created a structural solution to the problem – they have not one doona, but two doonas on their beds, meaning each individual gets their own personal blankie and no fights ensue.

What a cop out! I’m a middle child and can fight for what is mine. I have taken to tucking the doona under my arm before I go to sleep. I’m sleeping lighter as well and when I feel the first signs of movement I hold the edge tight. I’m not getting much sleep but I’m warm! Oh, and I’ve found a new appreciation for that prayer attributed to Reinhold Neibuhr:

The sad truth is that in the days to come, when one of us has gone to our eternal rest, the other is going to miss this wrinkle in our relationship as much as they will miss all the good and noble traits of the other. For as much as we may try to change the people we love, in the end, we love the whole person. It’s why marriage is considered a sacrament. At its best it mimics God’s unconditional love for us.