Why Crows don’t end up as Roadkill

I see a lot of roadkill on our country roads. Kangaroos, rabbits, sometimes a sheep, cockatoos, galahs and magpies, but I never seem to see a crow dead in the road. I’ve become increasingly interested in why is it that crows seem to avoid such carnage.

Cockatoos and galahs seem to run in packs. During harvest or even at sowing time, some grain may be spilled by a truck and the cockies and galahs will descend for a feed. But as a car approaches, first one, then the whole flock will take to the air in a panic as if the car is mounting a deliberate attack on the flock and they must escape. During this mass rush to the exit it is not uncommon for a straggler to bounce off the windscreen or mount itself on my grill and stay there like one of those old  ornaments on the bonnet of an FJ Holden. Sometimes, the flock appear to have cleared the area only to have one bird change its mind and direction at the last moment and fly into the path of the car.

Magpies are a little differe 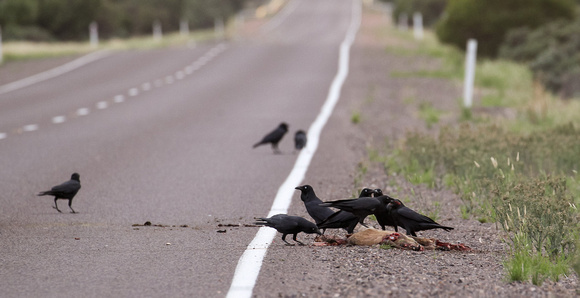 nt. They seem to be in smaller family groups and, tragically, it is the younger birds which are most at risk of making a miscalculation about speed and distance and their abilities to quickly take flight.

But crows are cool. Crows seem to understand that the approaching car is not coming after them. It is simply travelling down the road. Crows don’t even bother to try to fly away. If they are already out of the direct path of the car they barely move. If they are in the path of the car they simply take a couple of hops to the side and let the car pass safely by before getting back to the task at hand – enjoying their meal of a less savvy piece of roadkill.  You see, despite being bird-brained, crows are actually quite intelligent. They show an ability to understand basic cause-and-effect relationships, use tools to gather food, and even recognise individual faces.

These highly intelligent birds are not slouches when it comes to looking after each other and keeping a lookout for danger. There is usually a ‘lookout bird’ posted to warn their peers of approaching danger, but no, I don’t think they are shouting “Car, Car”. It’s just that they don’t panic. They assess the situation and take the least amount of action required to stay safe.

I wish the Bible had “DON’T PANIC” written in bold letters on its cover. “Be not afraid” is a phrase that appears again and again in those great stories of faith and an angel of the Lord often appears to try to settle things down.

Be not afraid when kingdoms come crashing down and families are ripped apart by war. “Be not afraid, Mary”, when God includes you in the plan for God’s incarnation. “Be not afraid, shepherds”.  “Fear not” when the storm is about to sink the boat.

Learning not to fear but to instead make a clear assessment of what has happened and look toward the future with determination and hope has become the rhythm of my life and ministry. Things rarely go as planned. Things are never as bad (or as good) as they seem. When we think we have conquered the world, we haven’t. When we think it’s the end of the world, it isn’t. It’s always somewhere in between – that elusive place where reality resides. But it is also the place where God resides and grace resides. God walks with us. “Don’t panic.”, he says. “Consider the ravens: they neither sow nor reap, they have neither storehouse nor barn, and yet God feeds them. Of how much more value are you than the birds!” Luke 12:24

This is the gospel, and it’s good news!