In 2007, the Solomon Islands was in the early stages of recovery from “the Tensions”. This was a delightfully understated term for years of violent civil unrest, the almost total breakdown of government; rival militias fighting each other; public servants, teachers and police abandoning their jobs as there was no-one to pay them; and business and foreign investment collapsing amid chaos and corruption.
In 2003, at the request of the Solomon Islands’ Governor General, Australia joined with 14 other Pacific Nations to form the ‘Regional Assistance Mission Solomon Islands’ (RAMSI) in order to bring stability to this troubled young nation and restore its broken institutions and infrastructure. RAMSI completed its mission of “Helpem Fren” in 2017. Australian AUSAID programs continue to support this fragile nation through a range of aid programs. 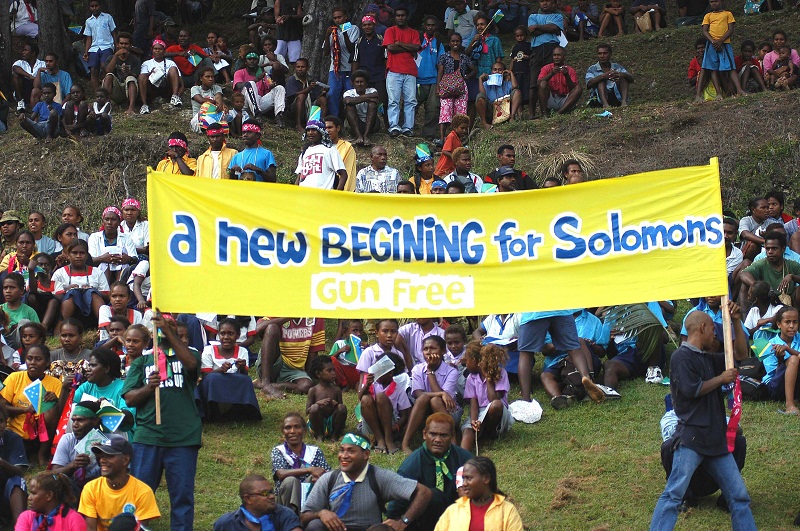 In 2007, I was in the Solomons as part of a team researching the establishment of the Australian Pacific Technical College (APTC) and I spent a few weeks meeting with local leaders in the health and community services sector to determine what Australian TAFE courses would be useful in upskilling local people to provide better health care, community leadership and children’s services.
Eleven years on I returned to the Solomon Islands to see how things had changed. My preference on such short trips to a foreign country is to try to stay in the one place and get to some depth and broader understanding of one place rather than play the tourist and move constantly from place to place. I find this gives me the greatest chance to strike up conversations with locals and learn how they see the world, their hopes and dreams, and the barriers they face.
In the eight days we were in Honiara (the capital) we attended church twice (at the invitation of people we met and struck up conversations with), visited the cultural centre, the RAMSI Gallery, listened to the Australian Navy band play and interact with locals, spoke with two women who are standing for parliament at next years’ general election, met a local pentecostal pastor who is convinced that God is calling him to enter into politics, and spoke with several young taxi drivers who talked of their disrupted education. We also paid a visit to the new offices of the APTC and met with the country manager. I was able to share with her how I had been part of the team that researched need for the college. I was gratified to think that I had played a small part in helping the Solomon Islands heal and grow.
In the last few days of our visit, we watched from afar our Australian government tear itself apart as Prime Minister Turnbull faced repeated challenges, growing defections and the unseemly machinations of ambition without mission. Australian politics can appear farcical, but we should never under-estimate how important the machinery of civil society are to our ability to live well. It may look like a school yard fight at times, but our institutions are robust and for all our differences we never fear that citizens will take up arms against each other.
I’ve never been a big fan of the way people use Paul’s words about the role of Government: “Let every person be subject to the governing authorities, for there is no authority except from God, and those that exist have been instituted by God.” (Romans 13:1) It seems strange advice for a man who wrote while unjustly in prison and who proclaimed the Lordship of Jesus who had been crucified by unjust and corrupt governing authorities. It’s obviously a statement that needs understanding of context and interpretation. But having witnessed how a society can collapse when the machinery of government fails, and having listened to Christian leaders who feel called to enter into the political realm; I have a greater appreciation of just how our governing authorities affect of ability to “liv the gud leaf” (Pidgin for “Live the good life”).
This is the gospel and it’s good news.
Brian Spencer, Minister