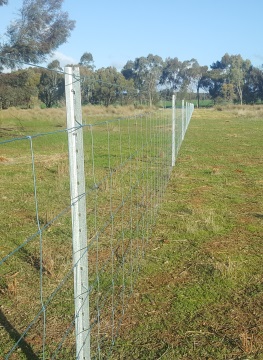 As the day wore on and I grew tired, the wind blew cold and rain threatened I was more and more likely to announce that “it was good enough”. This pronouncement seemed to cause great consternation from my mate Stretch who is the fencing contractor. Stretch, as his nickname suggests is tall and thin, I’m sure he would measure 7 feet tall. He’s a bit of a perfectionist, so “near enough” was not “good enough” for him. He would stride over to me and take a long hard look and then apply his own standards of “good enough” which often took quite a bit of adjusting here and there along the fenceline. With the strainer posts Stretch asked no-one for their opinion; he would produce his trusty spirit level from his pocket and place it on the side of the post. The spirit level didn’t lie, it didn’t get tired, it didn’t tell him what he thought he wanted to hear. If the post was straight, it was straight, if it wasn’t then it was clear to see.

In an earlier day, people used a plumbline. A plumbline is a string with a metal weight at one end that, when suspended, points directly towards the earth’s centre of gravity and so is used to determine whether something is vertical or not. Amos was an Old Testament prophet, Not prophetic in the clichéd sense of “foretelling” the future but in the sense of “truth-telling”. Amos likened his role to that of a plumbline. Basically that meant speaking the truth to power. Calling a spade a bloody shovel. Naming corruption for what it was. Amos described his role as being like that of a plumbline. A shameless truth teller. He says he saw “the Lord was standing beside a wall built with a plumbline, with a plumbline in his hand. And the Lord said to me, ‘Amos, what do you see?’ And I said, ‘A plumbline.’ Then the Lord said, ‘See, I am setting a plumbline in the midst of my people Israel; I will never again pass them by”. (Amos 7:7-8)

Amos was an ordinary man who would not be silent about corruption and injustice. Speaking of himself he says, “I was no prophet, nor was I a son of a prophet, but I was a herdsman and a tender of sycamore fruit. Then the Lord took me as I followed the flock and the Lord said to me, ‘Go, prophesy to My people Israel’” (Amos 7:14-15) Amos was called by God to denounce the corruption of the king and the rich and powerful who thought they they could get away with exploiting the poor and that somehow God would treat them differently because they were religious. Amos was part of that great rural tradition of simple country folk who call out the corruption of the rich and powerful.

Speaking the truth to power has continued to be part of the prophetic role of the church to this day. And sometimes God calls prophets to hold a plumbline to the church when it loses its way. We should never be afraid to face the truth, because even if it is painful to face, it is the only way to renewal and growth. Jesus said “you will know the truth, and the truth will make you free.”