A murder in my heart 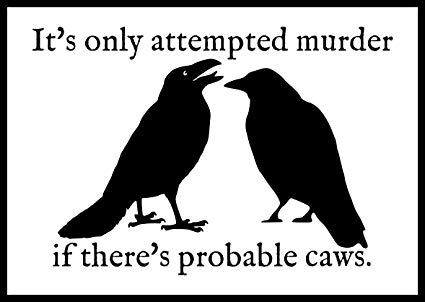 From early morning and periodically throughout the day a murder of crows descend loud and large into the vineyard. Their boisterous cawing can be heard from a few hundred metres away.

People often tell me that “I’m living the dream”, but at the moment it’s more like the Alfred Hitchcock thriller “The Birds”.  Whatever, the bucolic peace of rural living has departed with this winged invasion.

The crows, and there are hundreds, work in packs of 30 or 40 and glide silently into the ripest pasts of the vineyard. Once there, they hop and caw, flutter from vine to vine on their expansive wings, and bob their heads while raising a ruckus, eating grapes and dropping whole bunches to the ground. Usually I’m prepared to share the harvest with smaller numbers, but this has the potential for major damage.

My first attempts at scaring them away consist of driving the ute up a row of vines while constantly beeping the horn. They seem to laugh at my arrival and fly off into the surrounding paddocks, waiting patiently until I am gone. Their rowdy laughter reminds me of a gaggle of adolescent boys who have been asked to move along. As the fruit gets riper the problem gets worse. The day is filled with the sound of gas guns on neighbouring vineyards, the sound of shot guns, recorded bird distress noises and constantly driving the ute up and down the rows trying to disrupt and deter their murderous behaviour and trying to calm the murderous intent in my heart.

You wouldn’t know it to look at me.  I am not a man inclined to let my raw emotions get the better of me these days. Although in the past I was an angry young man. These days when I feel that surge of adrenaline and my heart beat speed up I’m somewhat embarrassed. I know that the primitive “lizard” part of my brain has been stirred. It has it’s uses, the surge of energy from such stimulation allows one to either fight or run in response to danger, but it all seems so unbecoming.

C.S. Lewis in his wonderful book “The Screwtape Letters” writes about the source of anger coming from the sense of our time being stolen from us. First published in February 1942, the story takes the form of a series of letters from a senior demon Screwtape to his nephew Wormwood, a Junior Tempter. In Letter 21 he writes, “Men are not angered by mere misfortune but by misfortune conceived as injury…. Now you will have noticed that nothing throws him into a passion so easily as to find a tract of time which he reckoned on having at his own disposal unexpectedly taken from him.”

He says that these unexpected interruptions anger us because we regard our time as our own and feel that it is being stolen. “You must therefore zealously guard in his mind the curious assumption ‘My time is my own’. “

So there it is, I am not just annoyed that the crows are stealing my grapes; I am angry because they are stealing my time. That’s why I want to murder that murder. But of course, being angry achieves nothing. Advice from the bible like we find in James, is no doubt true, but little help. “Everyone should be quick to listen, slow to speak and slow to become angry, because human anger does not produce the righteousness that God desires.” James 1:19-20

It all leaves me in greater awe of Jesus. The gospel stories just seem to be full of incidents where Jesus is doing one thing and interrupted, with some urgency, to do something else. Each time he seems to be there in the moment, making time, correcting false assumptions, healing, coaching, confronting as the situation requires.

I’ve got a bit further to walk on this discipleship journey.