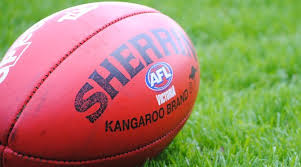 For the first time in many years, I am in a footy tipping competition. My grandson decided it would be a good family bonding activity. When I ran an office we had a competition among the staff and it was good fun and strengthen relationships. These days Smart Phones and apps make it possible to be part of a tipping competition while the participants can literally be anywhere in the world.

Picking winners seems straightforward for most games; past performance and the commentators analysis of recruitment, injuries and coaching seem to present easy choices for most of the matches. There are some hard choices where either side could rightly win and with these generally I choose with my heart.

And then the results come in! Upset after upset. Teams that should have had no hope have found form, new talent and a better game-plan over the off-season. Successful teams from last year are either still basking in their glory or have had too many good players retire. By Saturday night I have just two winning picks, my daughter-in-law, who forgot to put in her tips, has 5 out of 5, because all the “away teams” have won.

“Monday’s Experts” will make it seem so obvious as to why those who won did so and you would think yourself a fool for not seeing it beforehand.

It’s a good lesson for life, nothing is certain and we can all be wise after the event. We have to live with uncertainty and wait to see what transpires. We think we know how the world works and then things happen contrary to our expectations.

Sometimes bad things happen to good people but that doesn’t mean God has abandoned them or is punishing them. The story of Easter is that God suffers with us and that suffering both has meaning and can be redemptive. The gospels were all written from the perspective of the early church and from their knowledge of what happened in the years after Jesus’ death and resurrection, but the writers make it clear that at the time they could not imagine the events that were going to transpire. The disciples clearly did not expect Jesus to die. They certainly did not expect the resurrection. And they most certainly didn’t see themselves being transformed into the leaders they became. 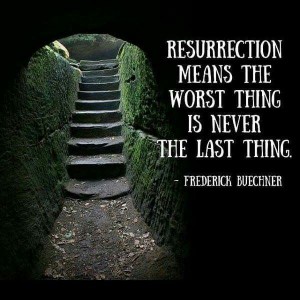 Our lives never seem to run to plan and there can be many little “deaths” along the way, but new life, new possibilities are always present, beyond our ability to predict. God can transform failure and disappointment in ways beyond our imagination. So I suggest that we make plans for our lives but be ready for God to do something more wonderful and confounding.