Skin in the Game

Back in the 1980’s, I was both a keen photographer and the proud owner of a basic , but well-made Pentax K1000 SLR camera. I was also a very keen footballer, and was in fact coaching an Aboriginal Football team, Coomealla, in the Millewa League near Mildura.

It was all a long time ago, but in recent years Facebook has helped me re-connect with a number of the people and players I knew. My Facebook feed told me that it was Rocky’s 55th birthday with one of those posts that reminds you how old you are because Rocky was just a 16 year old cheeky brat when I coached him. 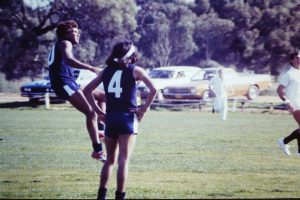 I decided I would search through my slide collection and find some photos of Rocky and the team and post them to Facebook as a birthday present for him.  That wasn’t as simple as it sounds because finding where the slides are was no easy task after 39 years. Then, having found them, I had to find a slide-scanner to save them in a digital format.

But there is nothing like a deadline, or a moment that must be grasped, to make me push past obstacles standing in the way.  I scanned football photos, wedding photos, school photos and even some cricket photos. Photos of young men and women, some of whom I know have died. But I knew that these photos would be appreciated because back in the 1980’s not everyone had a camera, and photography was an expensive hobby. In the end I posted about 43 photographs on Rocky’s timeline and wished him a happy birthday.

Later that same night I received a Facebook message, TALIA “HELLO BRIAN U MAY NOT KNOW ME BUT U MAY KNOW MY PARENTS THEY BOTH HAVE PAST ON NOW I AM ROY SNR N DEL. I BABY DAUGHTER N U ALSO MAY KNOW MY BELOVED BROTHER ROY JNR (DEC)”

This was an unexpected bolt from the past. I didn’t know Talia, but I did know her parents and her brother Roy. Roy was an fine young man and an outstanding footballer. Back in 1981 a group of four, including myself, established the Coomealla Aboriginal Football club. The club opened up many more opportunities for the young aboriginal men of the district regularly play football. It also served as a community development exercise and developed leadership and pride for so many more. But it wasn’t easy, there is so much that is needed to make a club than just putting a team on the field. Although that wasn’t easy either. Not all aboriginals are gifted footballers, like those we see in AFL ranks. And finding people to fill backline and key-positions was hard when most were by nature lightly built and better suited to the wings, flanks and roving. But we did it, and while score lines were mostly very one-sided against us, the team went on to play finals a few years later. But Roy was a standout. A natural ball-getter, he played as a rover-forward and in the second year of the clubs existence was out first representative to play in the Millewa inter-league side. We felt proud. About two weeks later he was dead, the result of a terrible accident.

After reading Talia’s message, so much ran through my mind. I responded, “HI TALIA, YES I KNEW YOUR PARENTS.. AND I KNEW YOUR BROTHER ROY WELL. I COACHED HIM IN THE UNDER 17S AND LATER WITH COOMEALLA. I WAS AT HIS BEDSIDE WHEN HE DIED. IT VERY DEEPLY AFFECTED ME. TOOK ME MANY YEARS TO COME TO TERMS WITH.”

Roy had been shot in the head by his best friend who was fooling around with a supposedly empty rifle. He didn’t die immediately. I sat with the family as they made the terrible decision to turn off Roy’s life support. I have conducted many funerals in my 40 years of ministry. The Coomealla community could be a violent place at times and murder, suicide and senseless deaths happened too often. But usually there was anger, or alcohol, or enmity involved. There was a reason, no matter how stupid, there was a reason. Roy’s death seemed without reason. No fight that got out of hand. No speeding car. Just friends fooling around. Roy’s death deeply affected me. 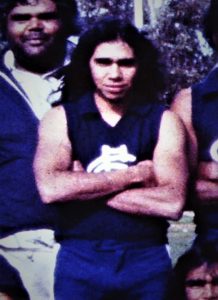 Talia responded with another text, “I HAVE BEEN AFTER PHOTOS OF MY BROTHER FOR YEARS AS IF I’M IN SEARCH FOR HIM..I REMEMBER U COMING TO HOME IN MILDURA TO MUMS 880-14TH STREET  N SCRIPTURE IN CENTRAL PRIMARY SCHOOL. I’M ALWAYS PROUD OF COOMEALLA FOOTBALL TEAM AS CHILD N TO MY ADULTHOOD
I THANKU DO BEING THERE AT MY BROTHER BESIDE BRIAN IT MEANS SO MUCH TO KNOW THAT.”

Words failed me then, as they fail me now. I felt useless. But I am glad I was there. And I’m glad that 39 years later that still matters to someone.

John at the beginning of his Gospel says, “And the Word became flesh and lived among us.” (Jn 1:14) The timeless Word became incarnate. Incarnate means “to put skin on.’ God’s response to human need, hope, sorrow, desire, pain, joy, and suffering is to wrap the divine up in flesh, and be present. On a given day, in a given situation, that incarnated God might be you. It might be me. This is how the divine chooses to be in the world.

He is the God who is with us.
This is the gospel and it’s good news.