A puzzle for our times

I’ve been drawn into the word-game ‘Wordle’, which is a simple five-letter puzzle. Each day players  have the chance to attempt to guess a mystery word. The twist is that there are ‘no clues’ and players have to guess the word in just six tries. After each guess, the colour of the square that the letter is placed in changes colour to show the player how close their guess was to the mystery word. 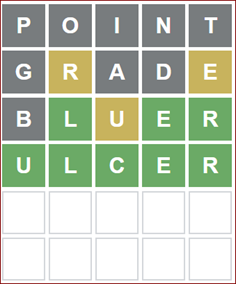 It seems to me that ‘Wordle’ is a puzzle for our times. The future seems to have become a puzzle without clues. What has happened in the past is no longer a good predictor of what will happen in the future. How many times have we heard the word “unprecedented” in the past couple of years? Used not just of the pandemic, which seems to throw up another “unprecedented” challenge every time we seem to be emerging into the so-called “new normal” but also in regard to floods, wildfires and “unprecedented” government expenditure in response to crisis after crisis.

We live in volatile, uncertain, complex and ambiguous times. Are we condemned to just make wild guesses about how to move into the future or are there still some guideposts and certainties for us to cling to? Back to ‘Wordle’. While the puzzle has ‘no clues’, we know that all valid words have a structure and follow certain rules and players enter the game knowing that they will usually fail several times. In this game, both successes and failures are valuable. It is often as important to know what doesn’t work as to know what does. Players often choose to start with a word that includes several vowels because they know that at least one of the five vowels, or a y, will be included in the mystery word. Feedback provided after each attempt is important. Finding that you have chosen the  right letter but put it in the wrong place or that a letter you chose is not in the mystery word is also a help. It gives a sense of progress.

The game also requires players to pause, to concentrate, to remove distractions, to be present. Players share their success and failures with others, creating a sense of community, and if you exhaust all six guesses today, you know there will be a new game tomorrow!

Conventional business and strategic planning assumes that things will continue to be in the future what they were in the past: a continuity, a gradual evolution or incremental growth. We look at what was and add or subtract 5%. There are many biblical allusions to such a future. “There shall come forth a shoot from the stump of Jesse, and a branch from his roots shall bear fruit.” (Isaiah 11:1). A branch grows from the stump of a tree.

There are other biblical passages that assume a great discontinuity between the past and the future: “Therefore, if anyone is in Christ, he is a new creation; the old has gone, the new has come!” (2 Corinthians 5:17) and “We know that the whole creation has been groaning in labour pains until now; and not only the creation, but we ourselves, who have the first fruits of the Spirit, groan inwardly while we wait for adoption, the redemption of our bodies.” (Romans 8: 22-23)

And then there is the mysterious book of Revelation which foresaw a supreme discontinuity: “a new heaven and a new earth” (Revelation 21:1) While there is a new earth, the writer declares that it is the same God who enriches every moment with his presence:  “I heard a loud voice from the throne saying, “Behold, the dwelling place of God is with man. He will dwell with them, and they will be his people, and God himself will be with them as their God. He will wipe away every tear from their eyes, and death shall be no more, neither shall there be mourning, nor crying, nor pain anymore.” (Revelation 21: 3-4 )

We have entered the third year of the Covid-19 pandemic. Climate change looms as an even bigger threat to the way our world has operated for the past few centuries. The future seems as uncertain and unknown as our first guess on a ‘Wordle’ puzzle. We go forward knowing that we will fail and often, but also knowing there is learning in failure and there is always forgiveness and another chance. ‘Wordle’ may only give us six chances but we follow a Saviour who taught us that we can fail “seventy times seven” and still remain within the love of God.