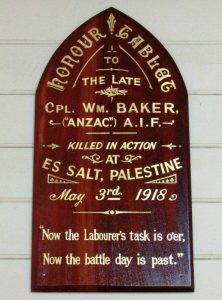 A wooden plaque commemorates Corporal William Baker who was killed in action in Palestine during World War One.

The following letter has been received by Mrs Geo. Baker, Colbinabbin, from Major Charley, a squadron leader of the Aust. Light Horse, in Palestine, and tells how her son, Corporal Baker, met his death : I thought you might like to get a note from someone who was there when your son met his death. I am his squadron leader. It all happened at 9:30 a.m. on the morning of the 3rd inst. Your boy had charge of a Hotchkiss rifle and was in the front line doing his duty when a sudden rush of the enemy came. They threw a bomb, which caught him and wounded the other members of his team and smashed his gun. He suffered no pain. It was all so sudden. Corporal Baker was one of the best lads in my squadron, and was loved by everyone. His mates held him in great esteem. He was so attentive to his duties, so full of courage and ability, so keen, enthusiastic and zealous, and was such a gentleman. He was wafted away suddenly doing his best in the execution of his duty. Please accept my sincere sympathy in your bereavement. Being his mother you will feel his loss so much. Try and take a little consolation in the fact that he died for his country; as so many thousands of others have done in this terrible war.
Yours Sincerely, W. T. CHARLEY, Major, 9th L.H., A.I.F.
Murchison Advertiser and Murchison, Toolamba, Mooroopna and Dargalong Express (Vic), 19 July 1918.