Wrong train but a good destination 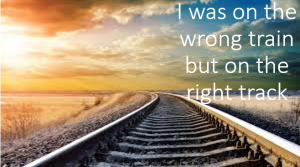 I was doing the basics of my preparation for Sunday’s church services, between pruning the vineyard, getting ready for a meeting in Seymour, another meeting back at the vineyard, organising a fill-in player for our pool team, and the usual emails, phone calls, etc.

Unfortunately, in my haste, I had chosen the wrong Bible readings, and because I liked the readings I marched right past all the warning signs and did my preparations.

The Gospel reading was the Parable of the Sower. Sowing seed back in biblical times was nothing like the precision agriculture of our Australian broadacre farmers. Today’s air-seeders and GPS guided sowing makes the primitive hand broadcasting of seed by the lone farmer seem impossibly inefficient. Yet until the introduction of mechanised farming in the late 1800’s that’s how seed was sown, and still is in some parts of the world.

This is a lovely, multi-layered story. In less than 100 words Jesus sums up four reactions from people as they hear and respond to his message.  Some instantly dismiss it. Some are initially enthusiastic but fall away. Some do their best but get stunted by competing interests. But some listen, hear and make it a priority for their growth as a kind, compassionate, hope-filled person.

But I had trouble choosing the hymns. No one seemed to write about it. So, for no better reason I found myself writing a hymn about the Parable of the Sower. I chose a well-known tune from the hymn book and started to compose my hymn. The first verse and chorus seemed to come easily, but I had to stop as it was time to go to my meeting in Seymour. I spent the couple of hours as I travelled to and from my meeting mulling over possible lines.

When I got back to my office I sat down and finished the hymn while the ideas were still fresh in my mind. I sent it off to the “voice of reason” (my wife) for her objective review and was delighted that she thought it was “perfect”, which is high praise indeed.

So there it was, I had written a pretty good hymn and was all set to send off my service preparations to organists and readers for Sunday’s services when I realised my mistake. I was not using the Parable of the Sower.

The only thing to do was put the hymn up on our website and make it available to all those people who will be using those readings on Sunday. I trust some of the seed will fall on fertile ground.

(You can see it here) (Download the sheet music version here)