Is it OK to kiss a stranger?

I visited my elderly mother in the nursing home the other day. She is nearly 95 years old and has moved from low care to high care. I don’t get to see her very often or as often as I should! And each time there is a visible deterioration in her memory. 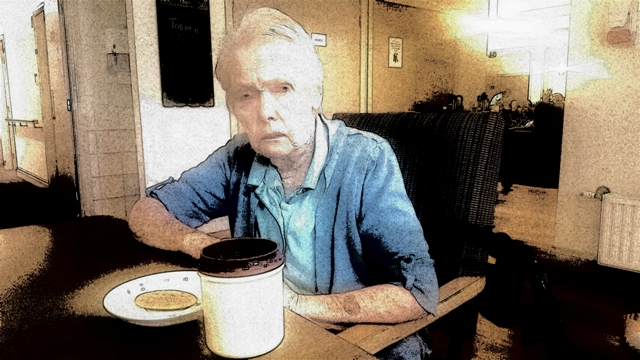 It’s the grandkids who disappear first from life. The rule seems to be that the short-term memory fades quickest. Grand and great grandchildren by their sheer numbers and brevity of contact disappeared from Mum’s memory years ago. Photos of them served only to remind her that they existed, but who they were and who they belonged to were a mystery that remained even after explanation. I gave up trying to explain the names and connections as it seemed to trigger more guilt and remorse than pleasure for her.

Now it has become my turn to disappear from her life. My mother’s dementia seems full-blown or whatever the medical term for such a condition may be. I am left with the guilt of too few visits but she is relieved of the guilt of forgetting. She now no longer knows that she has forgotten.

I sit with her for what seems a long time, although it is barely twenty minutes. She has a cup of tea and an Arnott’s Milk Arrowroot biscuit in front of her. The tea is in an insulated mug, which she decides is cold as the sides of the mug are cool as she grasps it. “Must have been made yesterday”, she says to herself. She pokes at the biscuit, but doesn’t pick it up. Seemingly unable to distinguish between it and the china plate it sits on.

As she looks at me, I wrestle with what to say.  Will anything I say mean anything? Will it cause her confusion or anxiety? I say to her, “You don’t know who I am, do you?”

“No”, she says without any particular interest.

“I’m your son, Brian”, I say. Mercifully, she makes no reaction or further inquiry and goes back to poking her biscuit.

I sit and observe this once hyperactive mother of six. Just the shell of the mother I knew, and wrestle with what to say or do next. There is so much guilt associated with aging parents. Will I see her again? Will she go on like this for years? Is it okay to tell her I love her? Is it okay to give her a kiss? Are these my needs or her’s?

They are my needs.

As I leave, I tell her I love her and give her a kiss on the cheek.

God of love surround this woman in the eternal now with your love. She who knows only the present moment has a rich and wonderful past. She was smart, able and enterprising. Recognise and love her. May she know and be known by you.

Are not five sparrows sold for two pennies? Yet not one of them is forgotten in God’s sight.
Luke 12: 6