I’ve been losing weight. A fair bit of weight actually. So much so that people who haven’t seen me for a while often don’t recognise me at first. Some people are reluctant to mention it, fearing that my weight loss might be caused by severe illness. Others cautiously ask, “Are you well?”

Fortunately, the answer is, that while the final trigger to make me serious about weight loss was being diagnosed with Type 2 diabetes, I am well and feel a lot better for shedding 30 kilograms. But such success is laced with doubt and indecision; will it last, at what weight should I stop, should I buy new clothes? 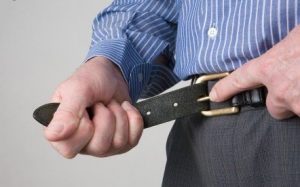 The phrase, ‘Tightening the belt’ suggests that things are not going well. These days it is normally used metaphorically and applied to financial difficulties. If you have to tighten your belt, you have to spend less money and manage without things because you have less money than you used to have.

It derives from a time when people went hungry when times were hard.  In many places in the world starvation is still a frightening reality. One may tighten their belt after losing weight from being hungry.

The irony for us in rich, Western nations is that cheaper foods are usually higher in fat and sugar. Spending less on food may in fact lead us to put on weight as we eat cheaper cuts of meat and cheap take-away foods.

I have lost so much weight that I have been tightening my belt. So much so that I needed to cut about 15 centimetres off my belt because the tail of my belt was starting to wrap around my waist a second time and it was embarrassing when it wouldn’t secure itself in a trouser loop. Despite this problem, it was a surprisingly hard decision to cut it off. Like most people who struggle with their weight, this isn’t the first time I have lost weight. It’s hard to get past that nagging, doubting inner voice asking, “But will it last?” It should be an easy question to answer, but it isn’t. It should be easy…

Making any commitment and sticking to it is tough. Change doesn’t come easy. Old habits die hard. It’s so hard to believe that this is forever. It’s easy to justify leaving the door open to, what my childhood church would have called, backsliding.

God seems used to dealing with fickle people who promise one thing and do another. At times God seems to lose patience with them, especially when they try to rationalise why they can’t accept their lot or commit to the task at hand. God told Job to “Gird up your loins like a man!” (Job 38:3), and told Jeremiah to “Gird up your loins; stand up and tell them everything that I command you.” (Jeremiah 1:17) Jesus told his disciples to “Gird your loins and light your lamps.” (Luke 12:35)

I’ve always thought it was a funny turn of phrase. Loins? Mmmm…

Back in the days of the Ancient Near East, both men and women wore flowing tunics and around the tunic, they would wear a belt or girdle. While tunics were comfortable and breezy, the hem of the tunic would often get in the way when a man was fighting or performing hard labour so when Hebrew men in ancient times had to battle the Philistines, they would lift the hem of their tunic up and tuck it into their girdle or tie it in a knot in order to keep it off the ground. This in effect created a pair of shorts that provided greater freedom of movement. Thus, telling someone to “gird up their loins” was telling  them to get ready for hard work or for battle. It was the ancient way of saying “Man up!”

Most of us want to grow and to improve. We try to become healthier. We work on our relationships and our quality of life. But though we desire growth and do try to improve, many of us lack adequate discipline to follow through with our desire for growth.

The thing we all know about commitment is that it’s only when you are willing to make an unconditional commitment that you create the possibility that the thing you desire might actually happen. Alfred Adler, writing about marriage, said, “If men or women contemplate an escape, they do not collect all their powers for the task.” He could just as easily have been writing about personal growth, genuine intimacy, sporting achievement, spiritual growth, or keeping to a diet!

Jesus said to one of his would-be followers, ‘No one who puts a hand to the plough and looks back is fit for the kingdom of God.’ (Luke 9:62)

I cut my belt!