From an All-Powerful to an All-Vulnerable God 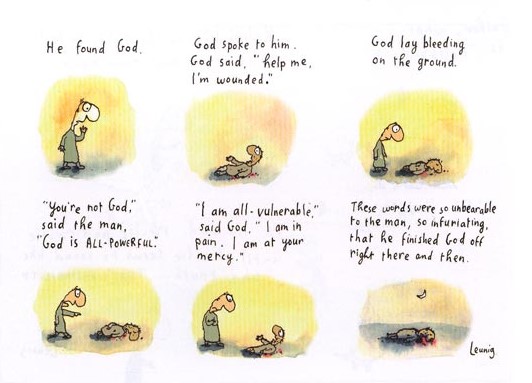 During a serious illness, a family crisis, the loss of a job, or the death of a loved one, many people will turn to God in new ways. Those with more sceptical minds usually mark this down to desperation. The person, they say, has nowhere else to turn, and so turns to God. God is seen as a refuge for the desperate and irrational.

Most of us do not turn to God in suffering because we suddenly become irrational. Rather, God is able to reach us because our defences are lowered. The barriers that we erected to keep out God are set aside. We are not less rational. We are more open, more vulnerable.

Christians throughout the world are currently celebrating the season of Epiphany. Epiphany means “revealing” or “manifestation.”  It’s a season of stories about the visit of the Wise Men, Jesus’ baptism, and old people going off their tree when they see the infant Jesus.

In the ancient world, an epiphany was the appearance of a deity made manifest on earth. People believed that the gods appeared in powerful rulers. The Pharaohs, Caesars, and other rulers were often viewed as divine. Because gods were viewed as all powerful, they were thought to reside in all powerful people. This is of course simply creating God in our own image. A projection of ourselves and our structures onto God.  These gods are just like us, only more powerful.

But Christians don’t believe that. Epiphany reminds us that God is not like the rulers who used power and violence to assert their wills. Epiphany tells us that God is not all-powerful. Rather, God is all-vulnerable. God is revealed not in a violent ruler, but in a baby. What could be more vulnerable than that?

An epiphany is an “aha!” moment when the whole frame of reference shifts and we see something we couldn’t see before. It’s the punchline of the joke. It’s the solving of a cryptic crossword clue. But before we can get to the epiphany, we need an attitude of expectation. An attitude that is open to seeing things in a new light. Sometimes it takes a personal crisis in our lives to create that attitude. It is the moment when our vulnerability meets an all-vulnerable God.

I was raised to be strong. I was raised to put my head down and soldier on during tough times and I took that to mean never be vulnerable because being so meant you were weak.

Because much of my childhood was chaotic and the people who should have been protecting me seemed incapable of doing so, I was determined to be in control of my own life. In my mind to be strong was to walk the brave path alone and it proved just how independent I was, unlike those who “needed” people in their life. But I have learned (the hard way) that vulnerability is not weakness. It’s about the willingness to reach out and to be open when you need to. It requires great courage.

I think about things a lot. About ridiculously big things like God and the meaning of life. And the more I study and wrestle with these huge questions, the more I am convinced that God reveals himself in weakness and vulnerability. The baby in the manager is just the beginning.