An Obsession with Mountains and Plains

I’ve spent a week following the footsteps of Major Thomas Mitchell when he explored Victoria in 1836. The Major Mitchell trail was a Bi-Centennial project. I’ve seen the signs to it for over 30 years, but the signs always seem to point at right angles to the way I’m heading. That’s because most of Victoria’s major highways lead to Melbourne, whereas Major Mitchell’s expedition went from the northeast to the southwest of Victoria.

Major Mitchell was one of Australia’s better explorers. He didn’t get lost in the desert, his team didn’t starve, he didn’t end up eating his horses and he died in his own bed. 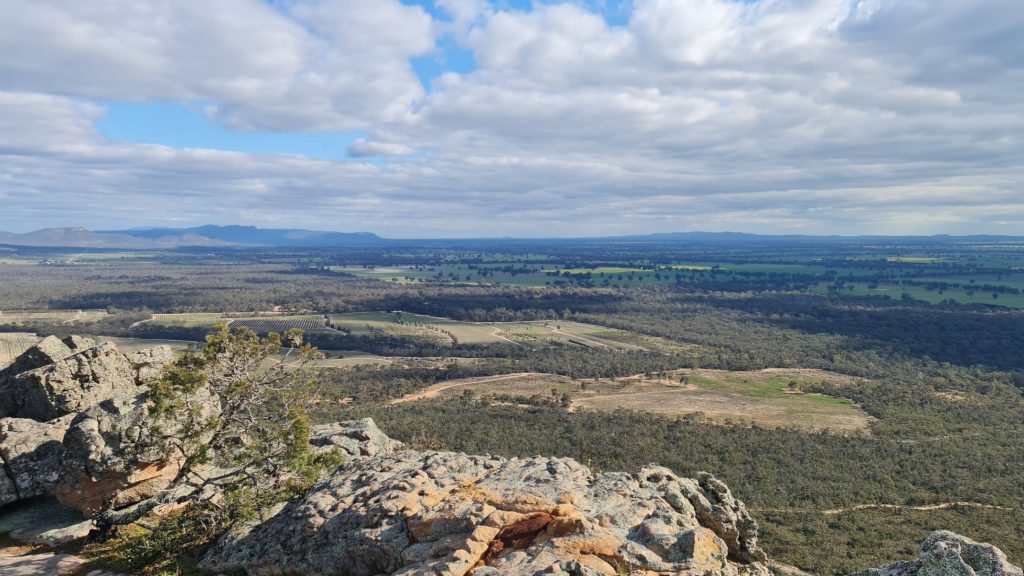 It was in June 1836 that he crossed the Murray River into what is now Victoria, beginning one of the most important expeditions in Australia’s settlement history. With Mitchell was a party of Aboriginal guides and white explorers, including convicts, and a team of bullocks.

As they moved along, they met with many groups of First Peoples. Some of these encounters were peaceful, but others involved bloodshed. Several Aboriginal people were killed by ambush in 1836 at Mt. Dispersion on the Murray.

As Covid travel restrictions eased for rural Victoria in mid-September, my wife and I took a week off to follow the trail. We soon realised that Major Mitchell seemed to be obsessed with mountains. Dotted across the map were several points where he climbed mountains: Mt. Hope, Pyramid Hill, Mt. William, Mt. Zero, Mt. Macedon and Mt. Alexander, to name a few. Some of these were on the path Mitchell travelled and some required him to take side trips.

Our adventure started in Pyramid Hill and of course we climbed it! It’s not a big mountain, but in the flat countryside it stands out and there are certainly good views from it. Later, we climbed Mt. Zero in the Grampians and closer to home, Mt. Alexander.

Mitchell climbed a lot of mountains, but his real interest lay in surveying the plains that might prove suitable for pastoral settlement. The party travelled southwest, around the north of the Grampians, down to Portland, before travelling back south of the Grampians through central Victoria to Murchison, Benalla and then on to Sydney.

Along the way Mitchell “discovered” the fertile river-fed valleys and picturesque plains of Victoria. Mitchell recorded his impressions of the region’s varied and verdant landscape in notebooks and sketches, which contrasted greatly with the dry interior he had earlier mapped. He named the region ‘Australia Felix’ and believed himself to be ‘the first European intruder on the sublime solitude’ of the area.

We travelled at the same time of year as Mitchell, observing country full of crops, orchards, vineyards, and pastures supporting sheep and cattle. It was a very enjoyable trip, but it was hard reading the excerpts from Mitchell’s diary which portrayed his sense of entitlement and his blindness to the First Peoples living there.

Mountains were also a very significant part of Jesus’ life and travels.

The gospels tell us that Jesus often went up to mountains (Matthew 14:23, Mark 6:46, Luke 6:12, John 6:15). Mountains were solitary places and Jesus valued them as quiet places where he could pray in peace. Many of us know about the Sermon on the Mount. ‘The Message’, Eugene Peterson’s translation of the Bible, says Jesus sat down and taught his climbing companions. Jesus also performed miracles on the mountain. In Matthew 15:29 to 31, we read that on the mountain “great crowds came to him bringing with them the lame, the maimed, the blind, the mute, and many others. They put them at his feet, and he cured them.”

It was while up a high mountain that Jesus was transfigured (Matthew 17: 1 to 17). And it was on the mountain in Galilee, that Jesus gave his disciples the ‘Great Commission’ to ‘go and make disciples of all nations’ (Matthew 28:19).

Most of us have had peak moments in our lives, ‘mountaintop experiences’ that gave us clarity of purpose, inspiration and vision for living, but we then need to return to our ordinary lives on the plains. Mountains are places that inspire us, but we live our lives on the plains. The fertile plains of Northern Victoria have made many prosperous and sustain vibrant communities. But wealth and comfort can dull our vision and are not an end in themselves. We need to hold fast to the vision and values that make for a just and truly great society.

In Jesus’ time mountains could also be a cause for division. In a conversation with a Samaritan woman, the woman said, “Our ancestors worshipped on this mountain, but you say that the place where people must worship is in Jerusalem (Mt. Zion).” To which Jesus replied that it wasn’t about mountains at all but our attitude, “the true worshippers will worship the Father in spirit and truth.”  (John 4: 23)

We don’t need mountains, but we do need to make time to sustain and renew ourselves: prayer, moments of solitude, and joining with others of like mind can help us to hold onto our clarity, inspiration, and vision.