Through a combination of prior planning and neglect I’ve discovered that I have fish in my dam. Not just fish but many, sizable Silver Perch.

It must have been about 4 years ago I bought a bag of 100 fingerlings at the Epsom Field Days. I released them into the irrigation dam at the back of my house and promptly forgot about them. I did look for them in the first few weeks after their release, but there was too much water and too few, too small fish. I assumed that they had either died or had become food for the numerous water birds that paddle around the dam or dive in from the overhanging branches of the large eucalypt on the bank.

I’d like to claim that it was patience that let me stop constantly checking and fretting about the fate of my fingerlings, but the truth is I moved on to other things and they were forgotten until a friend who was installing a solar pump and working near the dam asked me, “Do you have fish in that dam?” as he had heard some irregular splashing, which to his more informed ear sounded like fish breaching the surface.

This aroused my curiosity and I decided to look more closely and even throw in some small pieces of bread. Nothing happened the first day, but I did notice that the bread had disappeared a few hours later. I tried again and this time sat with a cup of coffee and waited. Within a few minutes I began to hear the sound of fish breaking the surface of the water as they snatched at the little pieces of floating bread. 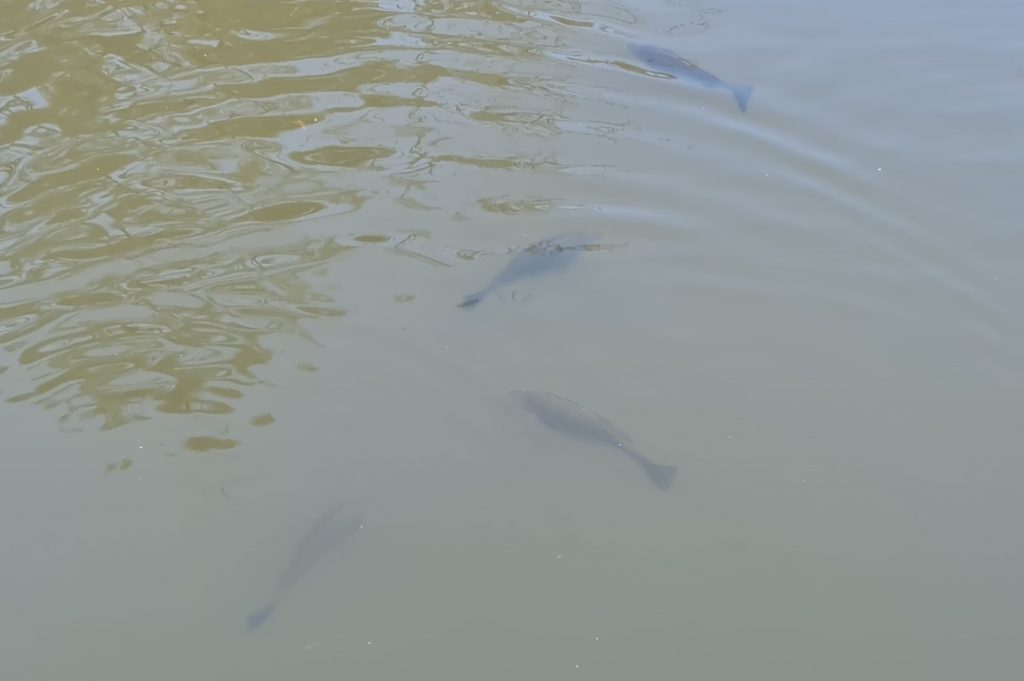 And so began a daily ritual of feeding the fish. A few minutes of quietness and reflection at the beginning and end of the day. It’s been good for me. I hope it has been good for the fish. I think they have come to expect it, because now they appear within seconds to get their bit of wholegrain.

As Covid restrictions have eased and friends and family have started to visit again, it’s become a joy to share the wonder with them. Adults and grandchildren alike smile and delight in seeing the fish emerge briefly from the depths of the dam to snatch a piece of bread then quickly disappear back into the deeper water.

As I feed them, I try not to think of them as food. I’d like to appreciate the fish for just being fish. But it’s hard because even though I’ve never been a fisherman, I have been conditioned to see any animal that is not a pet as food. It’s not helped by most people describing them as “pan-sized” in response to others questions about how big they are. But I’m trying and the joy that my grandchildren get from seeing wild fish feeding in Grandpa’s dam is probably more than I’d get from catching and eating them. For now at least…

The very first person that Jesus called to be his disciple was Simon the fisherman. Having borrowed Simon’s boat to use as a floating pulpit, Jesus suggests that they pull out into deeper water and do a bit of fishing. Simon is reluctant initially as he has worked unsuccessfully all night and now everything is washed and packed up. ‘Master, we have worked all night long but have caught nothing. Yet if you say so, I will let down the nets.’. When they do this, they catch “so many fish that their nets were beginning to break. So they signalled to their partners in the other boat to come and help them. And they came and filled both boats, so that they began to sink.” (Luke 5: 1-10)  It’s a great story, but the kicker is that having caught the elusive fish, Simon realises that it’s not fish that he is after. He is seeking something more from life and he sees enough of this in the person and  teaching of Jesus to leave his boat and nets and follow Jesus on a journey that would define his life and change the world.

Henry Thoreau wrote “Many men go fishing all of their lives without knowing that it is not fish they are after.”

As we start the preparations for Christmas and gift giving, let’s remember that it’s not really the gift that we are after, but to share joy and love and hope, and deepen our relationships with family and community.